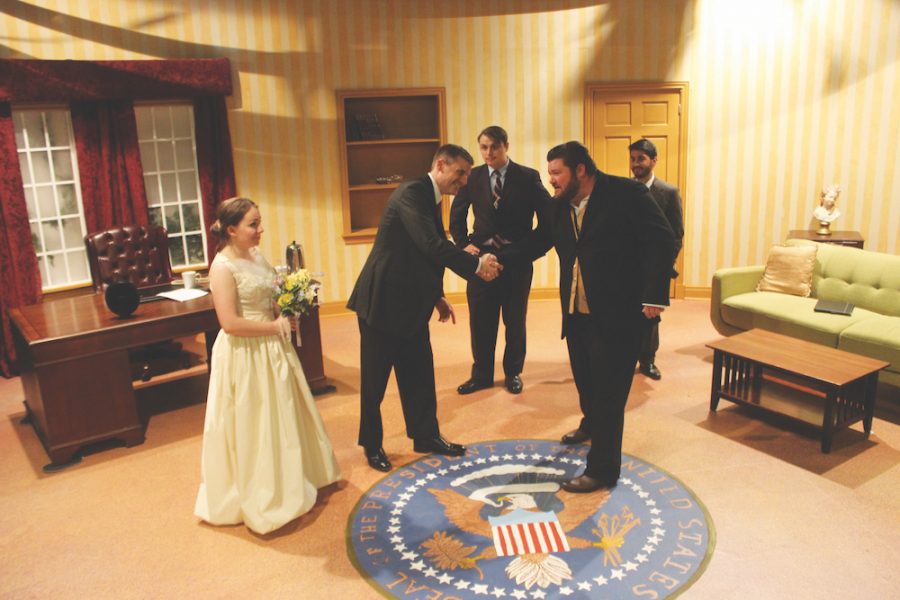 “November” opens at NEIU’s Stage Center Theatre on Oct. 13. It is a satire about a fictional presidential election, promising lots of laughs for theatre-goers who may be in need of some escapism this election season.

College of Arts and Science Professor Rodney Higginbotham is directing the production and chose the comedic work because it’s relevant to today.

“It’s too spot-on,” Higginbotham said. “Perfect for this election year.”

In the second act, a painful but hilarious joke references policies discussed years ago in Congressional sessions – certain policies that have been recently proposed by the Republican presidential nominee.

“My jaw dropped when I read those lines,” Higginbotham said. “The subject matter will immediately grab everybody’s attention.”

Written by David Mamet, a native Chicago dramatist known for works such as “Glengarry Glen Ross” and “American Buffalo,” “November” is an atypical Mamet play. Usually, his edgy, serious dramas are often populated by characters that are on the side of rough, crude, and foul-mouthed. “November,” however, is a farce and exaggerated, broad comedy.

The play’s first run was on Broadway in 2008, originally starring Nathan Lane as President Charles Smith. The play is set during a fictional administration, and the time frame is somewhere between the Clinton and Obama administrations.

President Charles Smith is up for re-election for a second term, but he is no favorite. Brutally rude, ruthless, and the leader of a laughably absurd administration, Smith is a very despicable candidate.

Smith is played by Robert Babcock in the Stage Center production. Be warned,  Smith in “November” is extraordinarily foul-mouthed. He makes racist, disparaging remarks about almost any group you can name.

Joining Robert Babcock is Kyle Medbery, playing the president’s Chief of Staff Archer Brown and his speechwriter, Clarice Bernstein, played by Emily Hosman. Additional cast members include Jose Navarete as “Turkey Guy”; Scott Barker as a representative from the National Association of Turkey and Turkey Products Manufacturers; and Dwight Grackle, a Native American.

Clocking in at about an hour and a half, “November” is relatively short for a typical full-length play, but it is sure to be thoroughly enjoyed, nonetheless. Tickets are available now and NEIU faculty, students and staff can see the play for free by picking up a ticket at the NEIU Information Center or at the box office on the night of the performance. Showtimes are Oct. 13- 15, 20-22 at 7:30 p.m. and Oct. 22 at 2:00 p.m.