Chomsky addresses the state of humanity 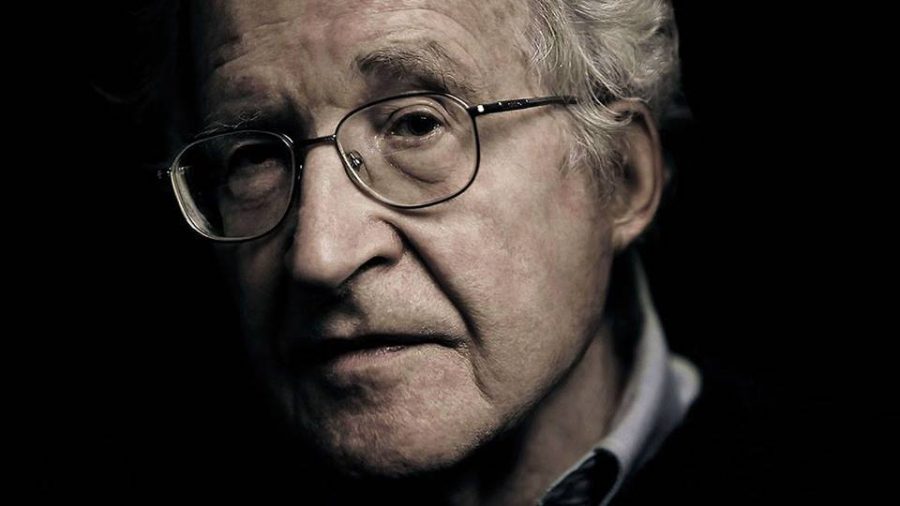 On Sept. 26, Haymarket Books, a publishing company, hosted Noam Chomsky at the University of Chicago where he gave a brief lecture entitled,  “Power and Ideology.”

The doors to the event opened at 6 p.m. but a line had formed well before that. People flooded the Rockefeller Memorial Chapel, and scrambled to find seats as close to the podium as they could.

There was a person selling the “Worker’s Vanguard,” a Marxist-Leninist newspaper publication. Another person handed out fliers to an event hosting Angela Davis who is known for her activism during the Civil Rights Movement. There was also a Green Party activist advocating for presidential candidate Jill Stein.

People chatted about the political climate of today’s landscape; everyone eager to take their seats to await the main event.

A spokesman from Haymarket Books publishing company came out and asked everyone if they could please turn off their NSA tracking devices, eliciting laughter from the audience.

And then he came out. The man. The myth. The Chomsky.

The audience erupted in a standing ovation, and were in awe as the 87-year-old Linguistic “rock star” made his way to the podium.

As soon as the applause ended, Chomsky opened with a simple question: “Will organized human life continue to exist?”

He explained that humanity is currently in the sixth era of mass extinction.

“A man is a wolf to its fellow man,” he said, referencing Thomas Hobbes, a 17th century philosopher.

Chomsky argued that nuclear weapons and the environment are the primary causes of the new era mass extinction.

“Nuclear weapons are the biggest threat to life on this planet,” he said.

He referenced the “Doomsday Clock,” a symbolic clock that represents how close the world is to a global catastrophe, being changed to depict three minutes away from midnight. The last time the hands were placed that close to midnight was in 1984. He also told the audience of several instances where world leaders ordered the use of nuclear weapons, but it was the courageous defiance of the ordered soldiers that prevented a possible nuclear war.

Chomsky called for the abolishment of nuclear weapons, calling it “a tool of unnecessary imperialism for economic interest.”

He then called for a more environmentally-conscious world. The number of species that are in danger of extinction, or are already extinct, is on the rise and it is all caused by the actions of humans. We live in a world with a finite number of natural resources, and us as humans are constantly demanding more.

After his lecture, Chomsky answered some questions from the audience.

When asked about Edward Snowden, he replied, “He should not just be pardoned, but honored. We should be asking whether the government should be pardoned.”

When he was asked about student debt and loans, he replied by asking, “Why do we pay for education? There is no economic basis for it.”

Finally, Chomsky was asked, “what gives you hope?”