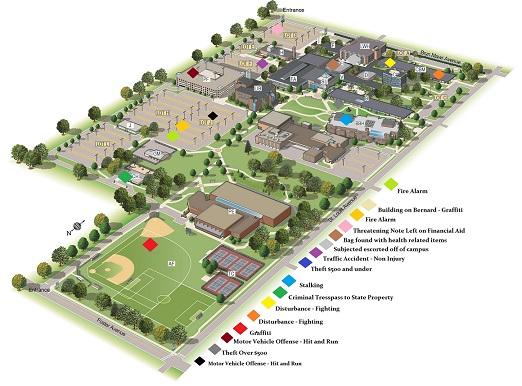 The following offenses occurred at NEIU’s main campus between June 22 and Aug. 18:

June 22 – Parking Lot J: An unknown offender struck and damaged a vehicle parked in the lot.

June 23 – B Building: An unknown offender stole tires from a victim’s bike off a rack.

June 28 – Parking Garage: An unknown offender struck and damaged a vehicle parked in the garage.

June 29 – Athletic Field: An unknown offender wrote graffiti inside of the baseball dugout.

July 05 – COBM: A subject of a disturbance was escorted outside to Lot D.

July 15 – COBM: A hostile female was screaming at employees.

July 18 – Day Care Center: An older female and child were trespassing in the playground after hours.

July 21 – BBH: A student reports that someone was stalking her. The offense is currently under investigation.

Aug. 9 – LWH: A subject was escorted off of campus.

Aug. 12 – E Building: A bag was found with health related items in it.

Aug. 12 – D Building: A threatening note was left on the door of financial aid.

Aug. 12 – Parking Lot J/The Nest: The fire alarm may have been triggered by heavy rain.

Aug. 15 – BOB: An unknown offender scrawled graffiti on the outside of the building.

The following offenses occurred at NEIU’s CCICS campus between July 18 and July 27:

July 27 – Disturbance/Fighting: A report was made about a fight in the women’s washroom.

The following offenses occurred off of NEIU’s main campus: