‘Lounging’: Not Just for Teachers 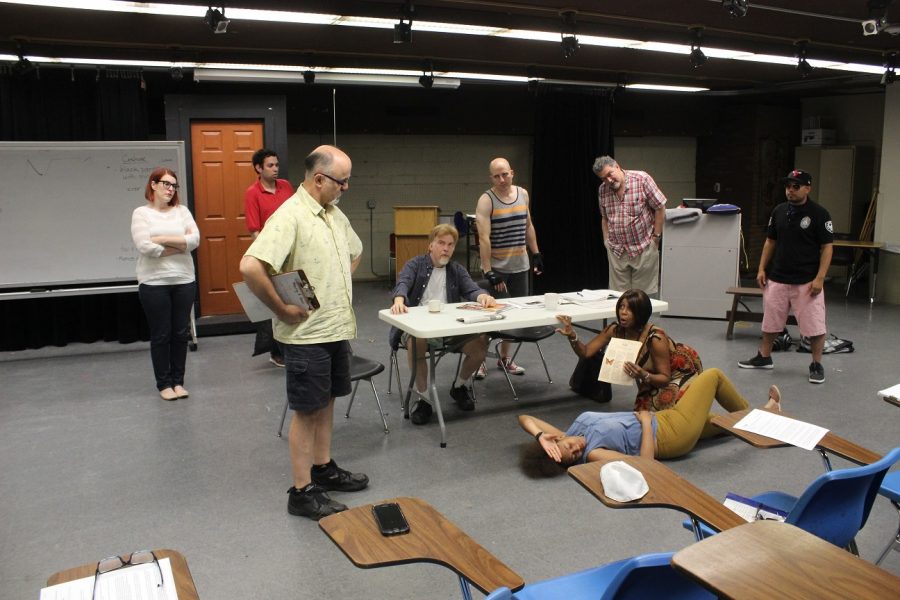 Tensions with administrative policies come to a head in "Lounging."

If you’ve ever wondered how your teacher REALLY feels, don’t miss “Lounging.”

It is written and directed by Jim Blair, retired professor of Communication, Media and Theater at NEIU and produced by Sasha Gerritson, professor in the Department of Music.

“Lounging” is an irreverently humorous look into the American public education system through the eyes of the teachers lounge.

The play draws on Blair’s experiences as a teacher in inner city high schools, as well as those of his peers. It takes place over the course of one overwhelming day, exploring the effects this hostile work environment can have on people.

“There is some dramatic embellishment but a lot of the things actually occurred—of course not over one day!” Blair said.

Topics range from lack of resources to lack of attendance, constantly underscored with biting humor.

It is both overtly and subtly thought-provoking. For instance, the entire play focuses on the faculty of the school. The students are conspicuously absent for one reason or another, which gives the audience pause to reflect on how students are meant to fit into the system.

“The public education system in America is in a state of crisis,” Blair said. This play does not attempt to offer solutions but rather shed light on the complexity of the issues associated with inner city public schools.

Something interesting to pay attention to is the way the various personalities of the faculty are affected by the job. The coping mechanisms employed by the characters are telling of how they handle stress.

When asked how he handled the stress for eight years Blair said, “If you want to move forward in something that you’re doing, be open to opportunity.”

Many of the teachers were being voluntarily transferred (against their will) between schools all over the city, at the time—a policy enforced by termination for non-compliance. Many teachers fought these transfers, citing religious and medical reasons. Blair did not and used the experience as an opportunity to expand his understanding of the world.

He found that drama, in particular, is an effective way of engaging students and credits the arts with the success of many of his former students.

This will be the second run of “Lounging” after 12 performances at the Raven Theatre in 2015.

“Lounging” will be playing at the Filament Theatre at 4041 N Milwaukee Ave from July 7 – 31. Showtimes are Thursdays, Fridays and Saturdays at 8 p.m. There are two showings on Sundays at 3:00 p.m. and 7:30 p.m. Saturday nights feature a post-show Q & A with the cast.

Tickets are $25 for general admission but only $15 with a valid student ID. Tickets are available at the door or by visiting http://lounging.eventbrite.com.