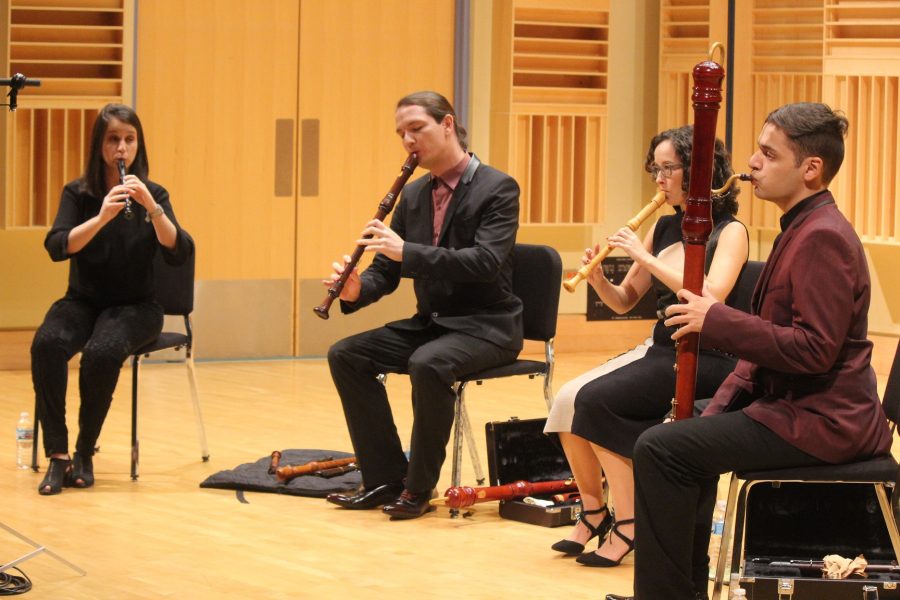 I never hear enough recorder in my life. The same is most likely true for many people, even in kindergarten and music appreciation classes.

The Quinta Essentia Quartet from Brazil made that statement truer with their strong performance on May 20. Presenting Johann Sebastian Bach’s “The Art of Fugue,” the four performers demonstrated technical skill with the distinct style of Bach’s Baroque sound – all on recorder.

“Quinta Essentia is the five elements, which is us, the four performers, and the recorder,” de Francisco stated.

Equipped with around 12 recorders of different voices, the group performed a historically accurate interpretation of Bach’s incomplete work, written close to the time of his death.

“We change between three consorts of instruments when we travel.” Gustavo de Francisco stated. “Right now we are using the Baroque consort, but we have a Renaissance and modern concert as well.”

Though only four voices are present in the composition, the group interchanged between soprano, alto, tenor and bass recorders of varying shapes and sizes.

“As performers, we are always trying to cross our limits through our instruments and abilities,” de Francisco stated. “We have a saying in Portuguese for things we like doing, We say, ‘if you like the meat, you’ll like the bones.’ If you do something you love, then you’ll appreciate everything about it.”

Once all members played together, it created a sound unmatched by anything I’ve heard before. It was music of the heavens, and the quartet was the angelic ensemble playing at the gates.

Even with the opening subject playing each time, every contrapunctus section felt new, like a composer toying with a familiar sound and adding awesome nuances, each one different in flow, rhythm and ornamentation.

In the program’s second half, the group demonstrates the oddities of Bach’s composition of the piece with five more contrapuncti, such as the inversion of voices and the incorporation of two fugues playing at the same time. In addition, the 12th and 13th contrapuncti were played forward and inverted. It’s even more amazing considering that the performers played by memory, like true musicians.

The ethereal sound from their performances complimented the piece very well, which has no set instrumentation by Bach. It left a very remarkable impression for me, and it sparked my interest to discover more pieces that utilize the sweet sonorous tone of the recorder.

Right after the applause for the quartet’s compelling concert, the four members emerged for a surprise encore: a Brazilian pop tune, complete with hip-shaking rhythm and sweet flute-like expression.  Quinta Essentia is a group that knows when to have fun and go past the limit.