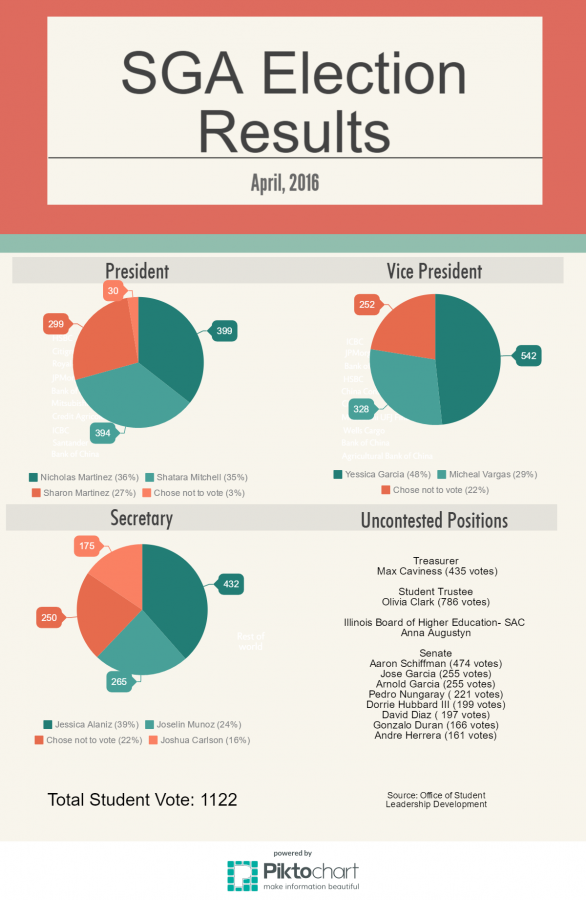 In a heated and contested race for the student government, current president Nicholas Martinez won over two challengers, among other winners.

The Student Government Association (SGA) elections held on the week of April 1 had candidates campaigning for student votes to see who would hold offices for the next year.

According to multiple sources, opponent Shatara Mitchell held a substantial lead over Martinez throughout the week of voting. However in a turnaround, Martinez won reelection with 399 votes, a mere five votes ahead of Mitchell’s final count of 394 votes. Sharon Hernandez, who also ran for SGA president, accumulated a total of 299 votes.

“I was actually planning on not running again,” Martinez said. “It ended up it was going to be a longer time (before graduating) than I was expecting to have.”

Martinez also said that he wanted to continue some of the work that he had started in the previous year.

“I felt there are a lot of things that are not yet done,” he said.

He cited projects such as a Student Bill of Rights as well as the El Centro and CCICS advisory committee.

“That was one of the reasons I decided to run again,” Martinez said. “I wanted to make sure things got saw through to the end.”

According to Independent newspaper archives dating back to 2006, Martinez is the only SGA presidential candidate to serve a second term in that time.

Other students who won in the election are current SGA members in different positions. Yessica Garcia, current SGA secretary, will fill the position of vice president. Current treasurer Max Caviness will serve again in the oncoming year.

Current student trustee Pedro Nungaray will serve as a senator on the SGA, while handing off his former position as Student Trustee to Olivia Clark.

Other winners include Jessica Alaniz for Secretary, as well as Anna Augustyn for Northeastern’s member for the Illinois Board of Higher Education’s Student Advisory Committee.

All eight students who ran for any of the 16 positions in the SGA senate won those seats. However, there are now vacancies there as well as in the Council of Clubs (CoC), the body charged with managing the funding that goes to student organizations at NEIU.

Students who are interested in filling these vacancies can contact the office of Student Leadership Development located at E-041B or by calling the office at 773-442-4970.