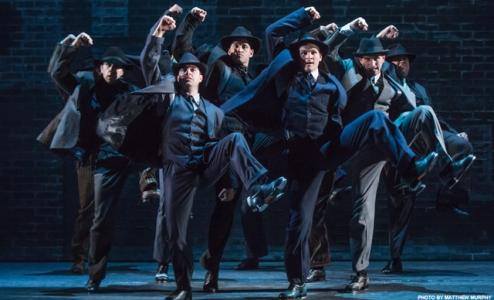 Tap dancing mobster are just one thing that await viewers in “Bullets Over Broadway.”

“Bullets Over Broadway” is a musical comedy by Woody Allen about the making of a Broadway show. The Chicago premiere of the Tony nominated show begins April 19. The Independent was able to talk to one of the show’s stars, Rick Grossman. Grossman plays Julian Marx, the show’s producer.

The Independent (IN): Can you talk a little about the show as a whole?

Rick Grossman (RG): “Bullets Over Broadway” is a musical based on Woody Allen’s 1994 Oscar-winning film. It is the first one of his pieces – films or stage plays that he had previously written – that has been turned into a musical. So, it was kind of a new venture for him. It follows, very closely of course, the screenplay he wrote with Douglas McGrath. It’s set in the 1920s in New York and it deals with the world of theatre and how crazy things can happen when theatre needs financing and where that financing can come from. In this case Julian Marx, the role that I play, is looking to produce the play by a young author, David Shane. He has trouble getting the money for it, but he finds it in an old friend who is a New York mobster. The mobster is certainly willing to finance the production provided that he can get a role for his girlfriend in the show. That leads to a lot of twists and turns that are hilarious and make for a lot of laughs and a lot of entertaining musical numbers throughout the evening, done by a cast of ultra-talented performers.

IN: Chicago has a lot of mob history. Even though this is set in New York, how do you think it will relate to a Chicago audience?

RG: I think of all the cities that we play throughout the country it will resonate tremendously with Chicago audiences because of the history of the mobsters in the 1920s. Really, I think people who relate at all to that era relate more to what was going on in Chicago and the most notorious mobster that was out there at the time – Al Capone, who ruled Chicago. These are the kind of characters that we see in “Bullets Over Broadway,” but it’s all done in a very comical tone. Although there are lots of machine guns that go off in the show and of course the costuming is very much of the 1920s, gorgeous costumes from the the multi-Tony winner William Ivey Long, it has that flavor, the speakeasy flavor, to it (from) the clubs that were prevalent in New York and, particularly, Chicago. So those people in Chicago who know of that era will certainly relate to this tremendously.

IN: Since the musical is closely based on the film, is there anything that’s really different about the stage production that might surprise an audience?

RG: In the film you see the mobsters kind of walking around and being menacing to a point. You see that in the show as well. What then becomes very surprising is that these mobsters who are carrying pistols and shooting of machine guns then break into song and dance. One of the greatest male tap numbers to be seen on the Broadway stage is incorporated into this production. It’s something that’s unexpected and the audience goes absolutely crazy when this happens. It’s probably one of the key high points, if not the high point, of the show. It really just makes it so much fun for the audience to experience that.

IN: Is there any kind of advice that you would give to young performers or those who are just starting out in their acting career?

RG: Sure. Of course I’ve been there, done that. Going into this profession, not only do you have to be prepared for it in today’s market as what we call a triple threat; if you want to get gainful employment you have to be proficient in acting, vocal/singing, movement/dancing. It requires a lot of discipline to do that. You have to be focused to do it. The other thing that you have to be prepared for is – I always tell this to young actors going into the business – your primary job is not going to be as a performer. Your primary job is to audition, because that’s what you’re going to be doing probably 90 percent of the time. That’s what you have to focus on. When you get the jobs from the auditions, well, that’s the gravy. But you cannot have the expectation that you’re going to go into every audition or any audition and get that job. Certainly that’s what your objective is, but to have it as an expectation, I find those people who go into it with that mindset don’t last very long in this business because the rejection is constant. You can be auditioning three, four times a day, four or five days a week, and nothing can come of it. You just have to keep plotting away and going after it. If you have that constitution and you have that resilience and if you have the talent, ultimately something will come your way. That’s what you have to be prepared for. You have to be strong and you have to be kind of tough-skinned and not take it personally because you get rejected for many different reasons: because your hair is the wrong color, because you’re too short, you’re too tall, you’re too thin, you’re too fat, you’re too young, you’re too old. These factors have nothing to do with one’s talent. The earlier a young actor can recognize that and deal with that, the more successful they’ll be.

“Bullets Over Broadway” runs at The PrivateBank Theatre, 18 W. Monroe St., through May 1. A limited number of day-of-show student rush tickets will be available for select performances for $25 with a valid ID.  Limit two tickets per ID. Visit BroadwayInChicago.com for more information.