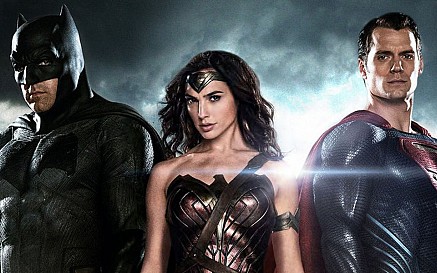 The DC Trinity comes to screen for the first time.

Everyone told me not to see it. A friend of mine begged me and told me I was crazy to spend my money on it. Since it is currently sitting at 28 percent on Rotten Tomatoes as of April 17, 2016, “Batman v. Superman: Dawn of Justice” must be a truly awful movie.

Yes. I am about to defend “Batman v. Superman.”

First off, let me just say that I did not love this movie. I can see that it is flawed and that there are things wrong with it. That being said, I believe this film is getting a lot of unnecessary hate.

I keep seeing complaints online that this movie got nothing right. Nothing!? Really!? What about Ben Affleck? That’s right, Affleck, the guy every nerd on the Internet raged about was absolutely amazing in his portrayal of an older, more jaded Batman who’s fed up with the crime wave of Gotham and starts branding his villains with his bat logo.

I keep hearing from my friends, “that’s not Batman!”

Clearly, you haven’t read a single comic in your life, because Batman is pretty dark. He’s the DARK Knight! This is a man who saw his parents get murdered right in front of him as a little boy, so he dresses up like a giant bat and beats people up.  You could say he has a few psychological issues he needs to work through.

As crazy as the branding is, I do love it. It’s a logical next step in Batman’s progression and it’s something we have never seen with an on-screen Batman before. Team Batffleck all the way!

Jeremy Irons’ Alfred was a total badass and even made a joke about the Christian Bale voice from the Nolan films.

Wonder Woman is more of a glorified extra, but her character works. I loved everything about her. Gal Gadot lit up as the Amazon princess and I can’t wait for her solo movie.  It’s perfect casting on DC’s part.

Here’s where the movie falls apart.

Superman: The superhero just took a back seat in his own movie. His name is in the title and he just blended in the background?. I’m not discounting Henry Cavill, he was quite likable, but his storyline was just boring and didn’t really offer much to the plot.

This is a sequel to “Man of Steel” and he did nothing.

Lex Luthor: Although I commend Jesse Eisenberg for committing to his role, which made him different from all the other on-screen Luthors; I hated his character. . His weird, Mark-Zuckerberg-in-desperate-need-of-Ritalin impression was really uncomfortable to watch. He stands out for all the wrong reasons.

The plot also doesn’t make much sense. The reasons for Batman and Superman to fight are clearly established on Batman’s side, but it’s barely hinted on Superman’s and it falls flat.  If you look at director Zack Snyder’s previous work, you’ll see a similar pattern..

“300,”  “Watchmen,” “Sucker Punch,” are all light on plot, but visually beautiful films with well-choreographed action.

The Batman warehouse fight scene is one of the best fight scenes put into film—ever.

It looked like it came straight out of the Batman Arkham games. It was visceral; it was gritty; it was brutal and had just the right amount of humor to keep it from getting too dark. It puts all the fight scenes in the Nolan trilogy to shame.

You could take a still-frame shot from any one of Snyder’s films and hang it up on a wall. His films are works of art. But when it comes to the story, his films fail and “Batman v. Superman: Dawn of Justice” is the latest victim of that.

This film had so much potential, but it lacks focus and tries to do too many things at once.  If only they tried to make a coherent plot, this movie could have been much stronger.