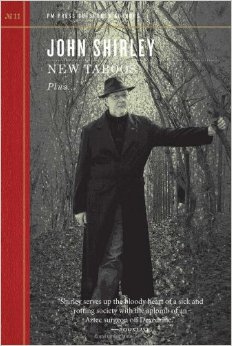 “New Taboos” is a small collection of writings by John Shirley. It consists of a short story, two essays and an interview with the author.

Shirley is mostly known for writing cyberpunk science fiction, which deals with futuristic concepts and how society interacts with them. This society is a dystopian future.  He is a forerunner of the genre with his classic novel “City Come A-Walkin”, published in 1980.

Set in the near future, a privately owned Arizona prison has grown so big, it fills out the majority  of the state. This prison has connections ranging from congressman to media figures, who want to keep profiting from it.

Power outages are a regular occurrence and facilities are run down, due to advanced security systems.

Two prisoners are bracing to escape. They’ve heard rumors that the prison doesn’t actually stretch throughout the state, and it’s just a myth to scare the prisoners. It’s a plot that works in setting the general atmosphere, but not the most original.

It might be that I’m just too sensitive, but the dialogue has some really unnecessary profanity. Shirley really wanted us to know that these were hardcore prisoners, but I felt like he was trying for an image a bit too hard. Let the words come out naturally, Shirley.

Meanwhile, a journalist is writing an article about the prison, trying to uncover all the rumors she’s heard. She’s in debt and it’s her last ditch effort, plus she knows someone that “owes” her this story, but something happens and she’s now a prisoner.

This story presents some nefarious acts, including sex slaves, organ donors and a sassy transgender prisoner.

“How long have I been here?”

What a stereotypical cliché.

That might be my main gripe with “Imprisonment.” It would have succeeded as an 80’s science fiction movie, but it doesn’t work today.  Shirley’s commentary on privately owned prisons is fine, but the execution is lackluster.

It’s hard to see past this possibly interesting world because of the actual story. He attempts to provoke the reader with a real world issue, and that’s great. Authors should be thought provoking.

But, Shirley messes it up with weak dialogue, stereotypical characters, and some boring rehashed plots.

Maybe if it were a full novel, it could have gained momentum and given the reader enough time to warm up to Shirley’s prose. Overall, it was an entertaining, though mindless read.

Next is his essay, titled “New Taboo.” The gist of it is: what if there was a universal taboo against big corporations and their immoral ways?

The answer: We would be better off because they would stop doing irresponsible things. I agree with the sentiment, but it’s nothing new.

It reiterates the idea that really big companies get away with things they shouldn’t and we shouldn’t like that.

His second essay is much more grounded.

Titled “Why We Need Forty Years of Hell,” in which he talks about the only way humanity will stop destroying Earth is by facing harsh consequences. The severe repercussions of climate change, pollution, fracking, etc. will force humanity into shape.

Believing we will “achieve a collective progressive consciousness as a result of the revelatory shocks.” It’s blunt and provides an actual, original, thought.

Last is the interview with Shirley, which should be read first.

It’s a good introduction to who he is and what he writes about. His answers are detailed and informative. He has had a long and interesting career from writing screen plays to writing songs for the Blue Oyster Cult.

You learn more personal details and learn about the hustles he had to go through. It allows you to get used to his style.