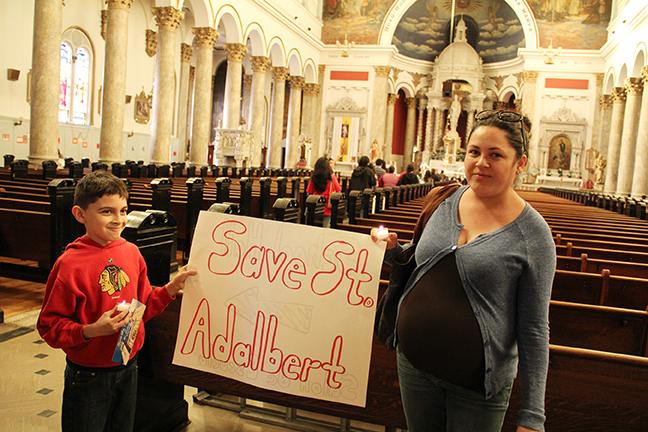 Silvia Villanueva and her son, Osvaldo, joined dozens of members of St. Adalbert's in a prayer vigil and march in Pilsen on April 15 to protest the church's closing./Photo by Mary Kroeck

I remember a time in Pilsen when there were several Catholic schools and churches, each with their own large congregations and traditions. It seems today like those traditions aren’t a concern of the Archdiocese of Chicago who is looking at the financial bottom line.

Growing up, I was a parishioner of St. Paul’s Catholic church. I went to grade school at St. Paul/Our Lady of Vilna and played basketball against the kids from St. Ann as well as the other elementary schools in the area. I attended Girl Scouts at St. Stephen’s. I could always see the beautiful bell towers of St. Adalbert’s in the near distance, a church that’s been in the community for over 100 years. The neighborhood was a community of faith in more than one regard.

As a student, I didn’t just go to classes Monday through Friday and that was that. It was expected that students (and parents) were involved in the church at night and on weekends and many were–as altar servers, lectors or choir members. All of that has changed. Many of the Catholic schools that existed in the area have closed in recent years, including my alma mater.

Within the next few months, several Pilsen parishes are slated by the Archdiocese to be consolidated. Parish congregations will be joined together and churches will close. The reason–there isn’t enough money to keep them open and the Archdiocese believes that in a few years there won’t be enough priests to go around.

The construction so desperately needed to repair the crumbling bell towers of St. Adalbert’s may never happen. Instead, they’re being told to shut their doors and no one knows exactly what will happen to the church after. For all I know, it could be completely torn down.

Crux, an independent Catholic news outlet, published an article last year that stated people are turning away from Catholicism at a higher rate than any other denomination. It’s really not hard for me to understand why.

While these closures are certainly hitting close to home for me, I firmly believe that people don’t always leave the faith simply because their parish closes. They leave the Church because they feel left out, pushed out, and left behind.

The Church keeps losing members of the faithful, yet encourages them year after year to “come home.” Come home to what? Another church where no one speaks to each other, signs of peace are mumbled, there is no sense of community, and the traditions that made a parishioner care about the wellbeing of their church and their faith are not taken into consideration by another parish? Not to mention the fact that women are still not seen as equals.

In the Roman Catholic Church women still aren’t allowed to become priests. In fact, most nuns take a vow of poverty while many priests can still own property. Where’s the equality in that? If that wasn’t bad enough, LGBTQ people of faith are often shunned by the Church. They aren’t allowed to marry in the Church and their civil unions are not recognized by the Church. Add it all up and you have some great reasons to “come home.”

The Bible teaches that churches are places of worship but truly living faith is based upon what happens outside of those designated walls. Each individual is a church of God, made in God’s likeness.

While that belief is great, it doesn’t stop a person from facing complications when you want to make a sacrament in a specific Roman Catholic Church and you’re not a parishioner. Then you have to jump through circus hoops to express your faith–even in death. I learned recently that if you want a Catholic burial and you haven’t been an official parishioner of a Church for a while, it can be a real headache to get someone buried unless your funeral director is well connected to a church.

It’s heartbreaking to see so many parishes close, especially because I truly believe it’s not because people don’t care about their faith. In spite of all these things, I still consider myself to be a Catholic because the faith is so ingrained in me. However, the way I practice my faith and the things I believe in don’t always neatly align with the patriarchy that is Catholicism. I’ve had to come to my own understanding of my faith and the Church and that process has not been easy.

My mom has told me more than once that I should start my own church. Maybe I will one day. For now, I would be really happy if Catholicism woke up, changed some of its male-dominated ideology and started treating people as equals no matter what. That’s how the faith grows. Maybe if those beliefs were mandated by the Church and put into practice sooner there wouldn’t be a shortage of priests now and parishes would be thriving.

If the Church can’t adapt to the desires of its people and recognize that some of its traditions are outdated, I’m afraid it won’t just be old churches that crumble. The faith itself may perish as well.