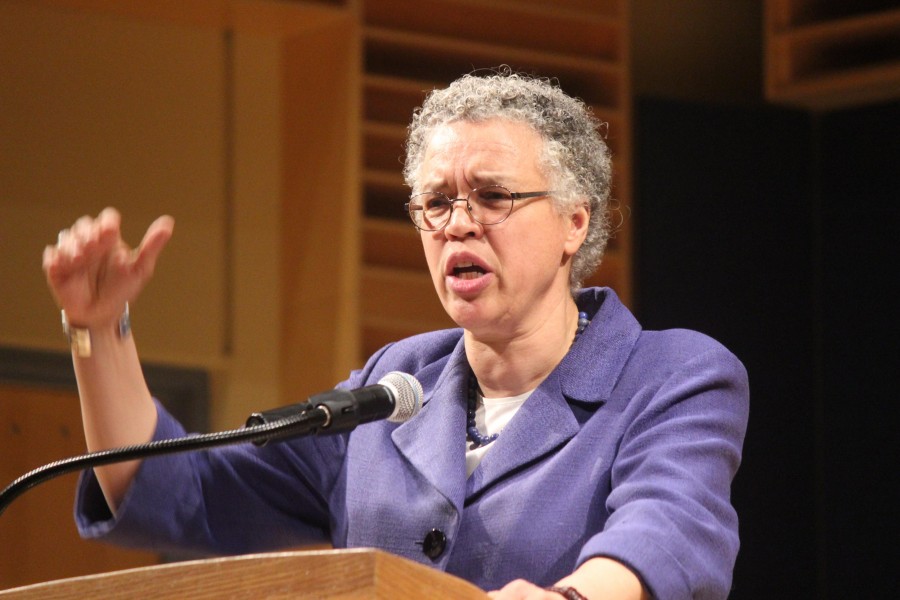 Toni Preckwinkle takes a strong opposition towards police brutality and the criminalization of black and brown communities.

Toni Preckwinkle left the stage of NEIU’s recital hall with teary eyes as she spoke about Cook County’s criminal justice system and the rate at which black and brown populations in the county are incarcerated.

In honor of this year’s Women’s History Month being themed around women in public service and government, Nancy Matthews, women & gender studies coordinator and professor, said, “Oh, it would be great to invite someone who embodies that in her life to campus, and I immediately thought of our guest, Toni Preckwinkle.”

Preckwinkle is the current Cook County Board president and has been in that office since December of 2010. Before assuming her position in that office she was an alderman of the 4th ward where she was reelected four consecutive times.

Her time as an alderman was also during the time Richard M. Daley ran the office of mayor for Chicago. When asked about her relationship with Daley Preckwinkle responded, “We had an interesting relationship, I was one of the few people on the council who was prepared not to always vote with him, so sometimes that caused me difficulty. But although we would not always agree on city-wide policies, we shared a conviction that it was possible to rebuild struggling neighborhoods.

“I was grateful to the mayor for the investment the city made in rebuilding my ward. The redevelopment that took place was most entirely on city land. When I came into office in 1991, the city owned more than 3,000 vacant lots in my ward and we worked hard with the development community to try and sell those off and build decent housing for the community.

“I tried to walk a line between not being someone who’s in his pocket and being respectful to him.”

While Preckwinkle made strides and achievements in affordable housing, criminal justice reform was what she spent most of her time speaking on throughout her time on stage. She talked about the frustrations she had with a system that incarcerates 93 percent of people awaiting trial, who most of the time, “end up being let go.”

She characterized jails as being “poorhouses,” stating that 70 percent of people awaiting trial are in for non-violent crimes and can’t afford to bond out of jail because “most of the time, the crime they were doing in the first place was to make ends-meet.” For this reason, she’s working hard to have more people awaiting trial to be released on their own recognizance. (Being released on “your own recognizance” requires no bail from the defendant, releasing them before their next court date.)

“I usually say that jails are an intersection of racism and poverty in this country. Half the population in Cook County is black and brown, 25% Latino, 25% African-American, but are 86% of the jail population.

“So, the people in our jail are overwhelmingly are accused but not convicted of the crime that brought them there, and secondly, are overwhelmingly poor and black and brown. And that reflects badly on all of us. It particularly reflects badly on the city of Chicago and our police department, because although Chicago is half the population of the county, 80% of the people jailed are from Chicago.

“I don’t think people in Chicago are more inclined to be criminals opposed to other people in the county,” Preckwinkle said. “I think it’s a function of the way black and brown communities are policed in Chicago.”

Though her time was not complete without first being asked about how the budget impasse has affected the county. Preckwinkle talked about how public services in the county are running out of reserve funds and are having to start to make cutbacks. Some of those services include child support enforcement and another program that helps those coming out prison find housing and get substance abuse support.

“One of the state senators whom I know very well, says that from her observation, the governor is content not to have a budget for four years and just let this play out, which I find profoundly disturbing. I don’t think he understands how democracy works. He thinks he’s head of this company and he can just order people to do the things he wants and he will break them the way you fire someone,” said Preckwinkle.