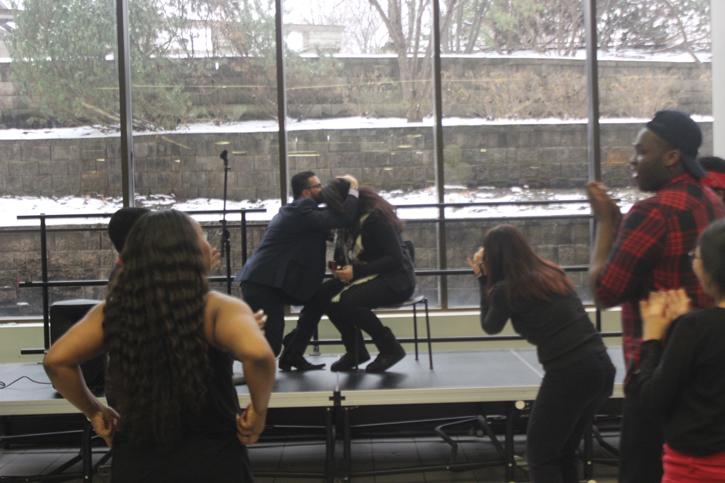 Tanya Gorgis had no idea when she woke on March 3 that her boyfriend of eight years, biology professor Nawaf Habib, would propose to her in a special place to both of them: The NEIU cafeteria.

Gorgis entered the cafeteria escorted by two friends, blindfolded. When the scarf was taken off, a hundred pairs of eyes were staring back. That’s when Bruno Mars’ “Marry You” blared through the speakers. The Golden Eagles Dance Crew hidden throughout the cafeteria began a flash mob dance and the crowd sang along.

Gorgis held back tears, daring not to believe what was happening. Then the music quieted and Habib climbed on the platform with her also holding back tears and said, “Tanya, do you remember the first time we met here when we were students? I’ve loved you since that time.”

Her “yes” was barely heard because the applause and cheers were too loud.

Once he regained his composure, Habib thanked the entire cafeteria.

“I love Northeastern, it’s my home,” he said. “Northeastern is my life and this is a message for everyone in Illinois, (Bruce Rauner) better not give up on us.”

Gorgis was unable to speak and could only describe her feelings as “shocked and excited.”

The couple left the cafeteria being showered with glitter.