All These Years of Music 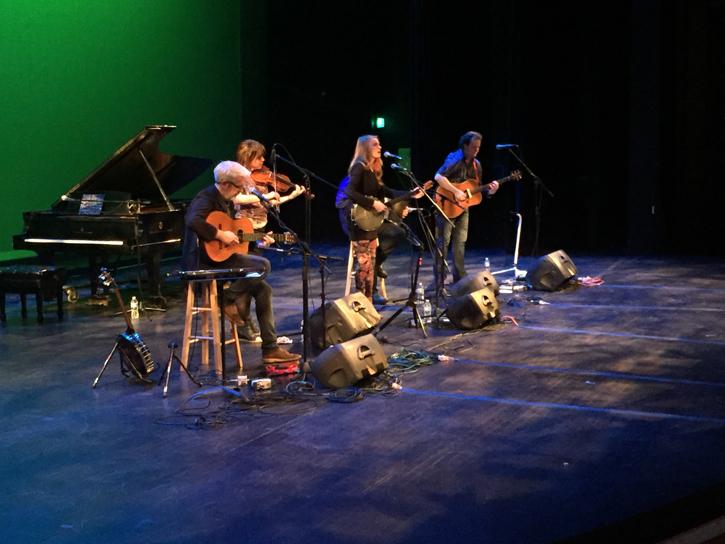 Solas, pronounced “suh-liss,” is a Traditional Irish Folk band whose members hail from both Ireland and America. This year marks their 20th anniversary and they are celebrating in a special way.

This year, they released their 12th album, “All These Years,” featuring contributions from all the band members from their early years to the present and recorded on both sides of the Atlantic.

Solas is the Gaelic word for light and features the current line-up of multi-instrumentalist, vocalist and newest member Moira Smiley from Vermont; guitarist Éamon McElholm from County Tyrone in Northern Ireland; button accordion player Mick McAuley from County Kilkenny in the Republic of Ireland; and founding members fiddler Winifred Horan from New York; and multi instrumentalist Seamus Egan from Pennsylvania.

With St. Patrick’s Day just four weeks away, Irish bands are in demand in the United States, according to McAuley. Luckily, NEIU booked them in time for latest edition of the Jewel Box Series on February 19th.

Solas played an energetic, fun show with songs from their latest release, and the one before it, “Shamrock City.”The show reminded me a lot of my time studying abroad in Ireland and all of the songs brought back great memories, especially the jigs and reels played. If there was more space in the venue, some audience members might have found themselves dancing.

Some of the songs were originals written by the band members, such as the opening song, “Mr. and Mrs. Walsh”—a jig written by Seamus Egan. The band made contemporary songs their own with a trad-style cover of “Darkness Darkness” by The Youngbloods and “Seven Curses” by Bob Dylan.

Moira Smiley’s voice is versatile and worked well with the diverse setlist. I could picture the sights from the ocean to the mountains and the streets.

Smiley and McAuley sat with the Independent for a quick Q&A:

INDEPENDENT: What countries have you played in around the world?

McAULEY: we’ve been lucky enough to play in a lot of countries. Several around Europe. We’ve been in France, Italy, and Spain and Ireland and England and Germany and most of the countries in Western Europe. Maybe not so much down the eastern part, but we’ve toured probably all the states in America and we’ve been lucky enough to get out to Japan and Australia as well along the way.

IN: Is there a difference between how the audience would receive your music in Ireland versus in other countries?

MA: Probably there is. We’re so lucky in Ireland that there are so many great musicians young and old that play Irish music, it’s sort of different playing in Ireland than anywhere else in the world. Just because it’s so popular and the standards are so high, but reactionally it’s probably not. We always feel welcome there and it’s always great to play while it’s fundamentally home for us all really.

IN: what music do you like to listen to both trad and non-trad?

SMILEY: Well, we love a lot of different music, but you know, I think probably we listen to a variety that includes something like an old traditional musician that’s doing something maybe that wasn’t commercially released, you know. You can admire Kendrick Lamar or the music of Beethoven.

MA: Down to everyone’s personal taste really. Obviously there’s no one thing that everybody collectively listens to in the band unless we’re going along in the car, we like sharing music with each other that we sort of discover. And that new record. Well it’s not too new anymore. That D’Angelo record is pretty good at the minute. We’re checking that out.

SM: Both Mick and I have been listening to that.

IN: What were your upbringings like? What part of the world are your from and where are your family from?

SM: I grew up in Vermont. It’s very rural, a very small place. From background, a mixture of Irish and Middle Eastern.

MA: I grew up in Ireland and I was part of a musical family. We all played Irish music so it was nice.

IN: What brings the whole band together in a musical sense?

SM: It was great. It was all over the world. It was recorded in five different studios and with different groups of people because there have been about 16 different people over the years and everybody gathered in different places when they could between their busy schedules and it was great because we were revisiting some old material and then putting together all new arrangements right there in the studio.

IN: What keeps you motivated?

SM: Music. It’s sharing music with other musicians and feeling excited about what they’re doing and always inspired. And also that music is a place where people, everybody, the audience, all of us come to be soothed and helped and educated and entertained. It just is a good place. People are in a good place usually when they come to hear it.