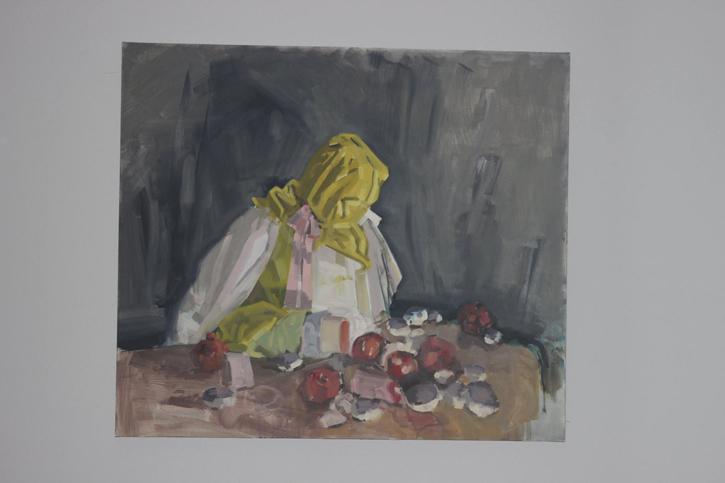 “Bystander recalls various incidents with malignant enthusiasm” is a bit of an oxymoron and a mouth-full but it fits Jason Dunda’s style just fine.

Consisting of a mixture of observational and surrealism; cool colors form unconventional shapes, angles and blotches at the new art exhibit featuring works from Jason Dunda.

At an artist’s presentation at the Fine Arts Gallery, Dunda said he likes to experiment with composition, proportion and color.

I’ll give Dunda more credit than he’ll give himself. His paintings are a lot more than technical art jargon.

His work is subtle; you will notice the different intensities of colors before noticing the actual image.

There is a painting that was particularly hard for me to understand due to this subtlety. I stared for some time trying to discern the shapes. I tried relaxing my eyes. I tried moving farther away. Still, I could not see the picture as an observational piece.  All I saw was something completely abstract.

The piece was “Amaranth Barusk is a self-smothering cannibal.” Dunda must have painted something that was physically in front of him for this piece.

“Most of what you see are observational paintings,” Dunda said. “The model is actually a pink Styrofoam dummy that I built and dressed up with thrift store clothing.”

I kept thinking to myself: Is this piece the exception to Dunda’s observational style? He did say “most”.  No … I was sure there was a meaning within the painting, and maybe it was a pink Styrofoam dummy.

I continued to stare at the painting and until I finally saw a hooded figure slumped on the table with a severed hand lying on the table.

This is how Dunda’s art works: The imagery is right in front of you, but it’s lost due to the intense use of colors and messy paint work. Dunda explained his method of obscuring imagery as “being what they are, but also not being that.”

A picture full of different colors and shades is something I can stare at for a long time,  and it’s as captivating as staring at the sun. I say that in a good way. Dunda’s art can be stared at for a long time.

It is genuine. Other pieces such as the “In the most complete solitude, a plea of the most remarkable” is a completely alluring painting. It is a striking bright blend of blue and brown with traces of pink. It’s a “Where’s Waldo” picture you get lost in, scanning the entirety of the canvass amused by the colors but also looking for a hidden meaning.

“The color is really decisive,” Dunda explained. “ I’ll spend most of my time on the palate and a minimal amount of time just getting it down.”

I say all this just to get to the point that this art exhibit is a great introduction into appreciating art. Dunda showed me that  art can be a bunch of pretty colors;  it can be a hooded man without a hand, but it’s all about perception.

I feel that I’ve stared long enough at his paintings to know that his “Mai Dang Lao” piece is actually an analytical breakdown of the subversive qualities that Frylock instills into modern society. Or it could just be a painting of French fries, who knows?

This exhibit will be on display until March 18, and is free to all in the Fine Arts Gallery.