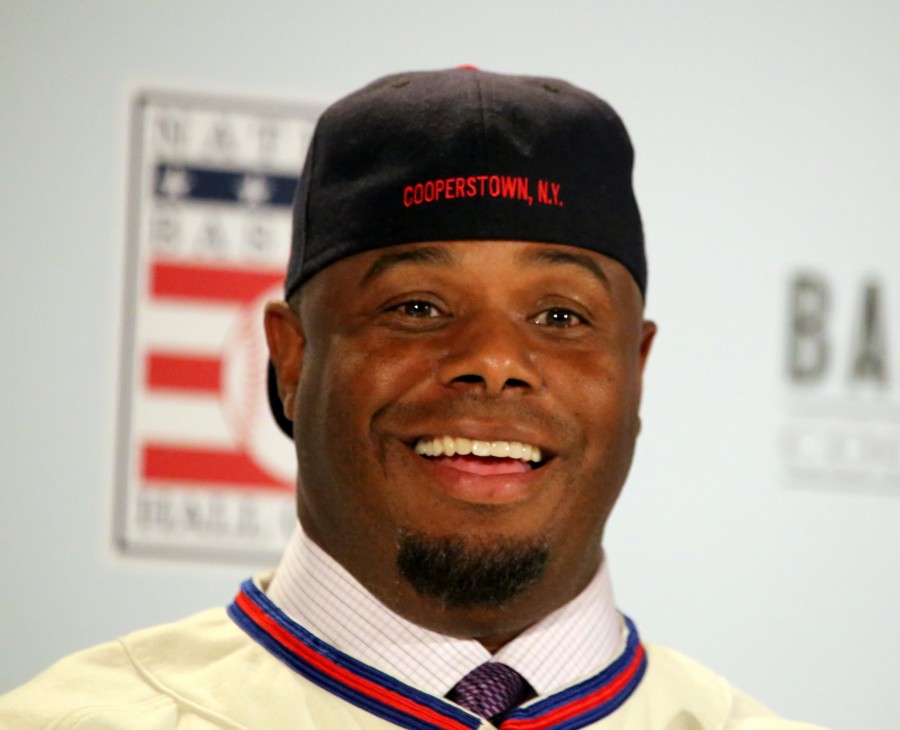 Ken Griffey Jr. goes with his trademark backward cap during the Hall of Fame Press conference.

Griffey was taken with the first pick in the 1987 amateur draft and made it to the majors in 1989. Griffey showed much promise at his young age. This wasn’t surprising given the fact that his father, Ken Griffey Sr.was a three-time All-Star player. The two even played together on the Seattle Mariners during Griffey Sr.’s, last two seasons, and are the only two father-and-son players to hit back-to-back home runs in a game. It happened vs. the California Angels in Anaheim on Sept. 14, 1990.

Mike Piazza who was elected to the Hall of Fame with 83 percent of the vote had already been on the ballot three times before this year.

Piazza, an unwanted college player, ended up being drafted because his father was friends with Los Angeles Dodgers manager, Tommy Lasorda. Originally a first baseman, Lasorda convinced LA scouts to draft him on the condition that he would convert to catcher. Hesitant and unwilling to do so at first, the Dodgers caved, and in 1988, with the 62nd pick in the MLB draft they selected Piazza.

Being the first catcher elected to the Hall of Fame since 2003, Piazza had a hard time getting selected due to suspicions of performance enhancing drug (PED) use. These suspicions were never proven true though, and Piazza goes in as arguably the best-hitting catcher of all time.

“It all adds up and it crystallizes how special this game is … that you can have two guys going into the Hall, such as Ken Griffey Jr. and myself, from completely opposite ends of the spectrum athletic talent definitely helps, but it’s not the only thing that can make you successful,’’Piazza said.

“Today is just a day I really want to celebrate my career and dwell on the positive parts of my career. As a player, you put all the numbers up that you can and work as hard as you possibly can, and like an artist, you put it up there and people can be critical and people can be complementary. I’ve been blessed that a lot of people have been very complimentary,’’ Piazza responded when asked about the PED issue,

Griffey was also blessed with the gift of being a fantastic full-package player, and was able to become an all-star after just one season. From 1991 – 2000, Griffey averaged 40 home runs, 113 RBI and a .976 on-base-plus-slugging percentage (OPS).

Griffey recalls his father, Ken Griffey Sr., as a key role model in his successful MLB career and a big reason why he stayed away from PEDs when they became popular among hitters.

“I was already popular. It wasn’t that I needed to jump out and surprise people. And it helped having a dad there throughout all this,’’ Griffey said. “Only few need to go out there and want to play and be the best, but it wasn’t that I had to have help. If you couldn’t do it on your own, then so be it.’’

Griffey goes into Cooperstown with a total of 630 home runs,13 All-Star games played, and an OPS of .907.