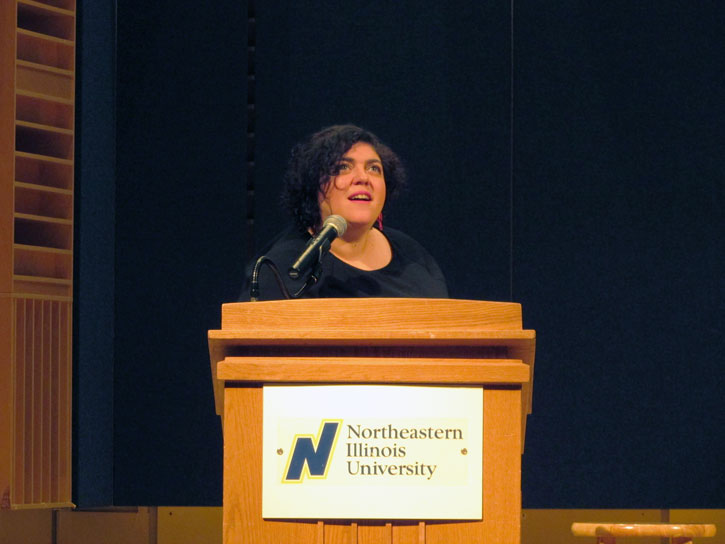 Randa Jarrar discusses the process of writing her book.

The creative writing teacher from Fresno State University read excerpts of her award-winning debut novel “A Map of Home,” a hilarious coming-of-age story about Nidali, a young girl who moved the US from Egypt as a teenager.

This heavily fictionalized version of Jarrar’s own experiences had the audience laughing as she read lines, like where the father character yells at a McDonald’s employee “I said no bickles you pitch.”

But for every laugh out loud moment, there was just as much heartache. After Jarrar read from her book, she explained how her father hated it and disowned her once he read it.

“My dad read this book, thought the sex scenes were disgusting and shameful,” Jarrar said, “Like it was shameful for a woman to write sex scenes.”

But then she finished with “Which means he doesn’t read Arab novels, because all Arab novels have sex scenes in them. All of them.”

While he claimed it was the sex scenes that offended him, she believes that because the father character was an unsavory narcissist.

Jarrar did use her own father as inspiration for the character, but took many liberties when writing him, just like with her story.

For years, Jarrar and her father did not speak and she documents the experience in a new essay entitled “Biblioclast,” A biblioclast is a person who burns books. Her father would only resume speaking to her if she publically burned every single copy of her book that exists.

The essay documents Jarrar’s fantasy of what it would be like to buy every single copy of her book, from publishers, from bookstores, from libraries around the world. An impressive feat, considering the book has been published in dozens of languages. Interwoven with this fantasy is the history of book burnings, most of which are religious texts deemed heretical. She compared her novel to a blasphemous text that clashed in her household, “where my father was God and his word was truth.”

Though Jarrar and her father did eventually speak again, without her having to burn any books, their relationship was forever changed. They are not as close as they used to be. And while this does seem to hurt her, Jarrar stands by what she wrote.

“I’m not a child, I don’t need your validation,” she said when she realized that she wasn’t writing for anyone but herself. Jarrar encouraged every writer to not be afraid of offending someone with their writing.

“Create something that connects with people,” she said. “I wrote something to connect, not to be a good daughter.”

“A Map of Home” has connected with hundreds of thousands of readers around the world. Jarrar’s unapologetic depiction of growing up as an Arab-American in the ‘80s and ‘90s has garnered recognition for its unique voice.

“I wrote this book…because there wasn’t a book like it and there fucking wasn’t gonna be one,” Jarrar said about the autobiographical features in the story, such as the locations. She explained that there was a serious lack of novels growing up that she could relate to as an Arab-American teenager. “Why can’t someone like me, with my background, exist in the literary landscape?”

But this created a new set of problems.

“Because of the similarities between Nidali’s background and mine, people tend to think that’s me,” Jarrar said. The book is fiction and it angers her that “Writers of color are often ‘read’ in their fiction.”

But Jarrar admitted that it is hard to fault a reader for seeing a writer in their stories.

White readers she believes, think that colored writers can only write autobiographical stories because they have more interesting lives and can only write exactly what they know.

“And they’d be right, we are more interesting,” Jarrar joked. But the implications of that are that fiction writers just sit there combing through diaries and that no work goes into their writing; taking away the craft element, she says.

“People think that we aren’t capable of imagination,” Jarrar continued. But her fantasy of redeeming herself in her father’s eyes by burning her books proves that while something can be emotionally true, it can still be fiction.