The Man Who Murdered Sherlock Holmes 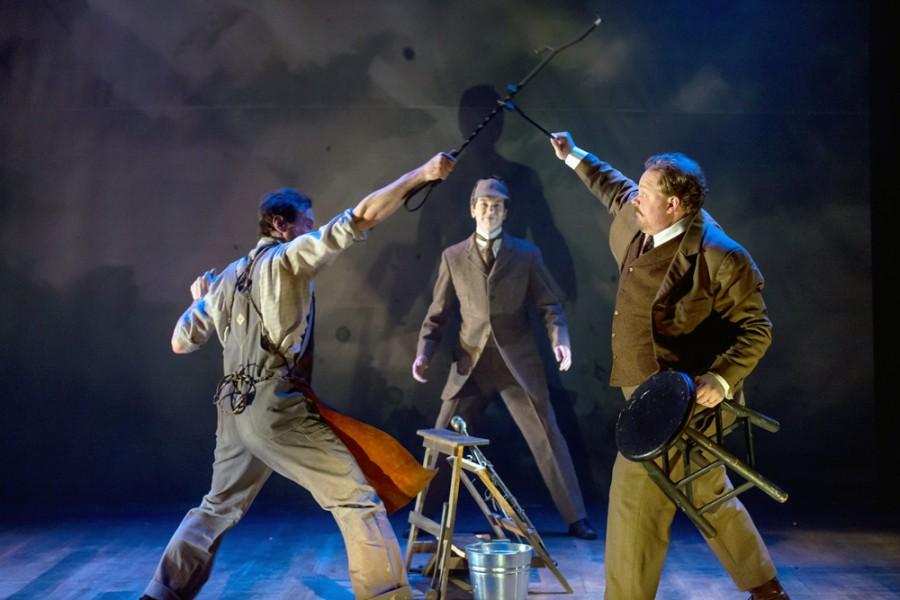 “The Man Who Murdered Sherlock Holmes” is a new musical that made its world premiere at the Mercury Theater Chicago on Jan. 20, and follows the aftermath of Arthur Conan Doyle’s decision to kill off his most famous character: Holmes.

All of England is shocked and call him a murderer. Even his own mother curses him out on the phone.

But when a real life mystery that threatens a possibly innocent man’s life, Doyle (Michael Aaron Lindner) retires to the country to offer his services. And escape the angry mobs with torches and pitchforks.

While examining the crime scene, Doyle starts to hallucinate someone; Holmes himself (Nick Sandys.) Holmes is furious that he has been killed off and in the midst of all the drama in Doyle’s life, he has the fictional character begging to be brought back to life.

Lindner and Sandys bicker back and forth like an old married couple that brings “humour” with a “u” to this Chicago theater.

Inspired by actual events, the show was twenty years in the making.

Actor and playwright John Reeger was perusing a local Chicago library when he found a book entitled “The Real World of Sherlock Holmes,” which turned out to be about Doyle’s real life criminal investigations.

Recognizing the story’s theatrical potential, Reeger spent the next ten years writing scenes.l. In 2005, he shared the first draft with composer and lyricist Julie Shannon who wrote a majority of the beautiful music.

However, Shannon fell ill and passed away in 2012.

Reeger set the show aside until 2014 when Walter Stearns, executive director of Mercury Theater, organized a reading of the show and offered to produce it.

Composer and lyricist Michael Mahler was brought on to complete the score, though much of Shannon’s original compositions remain.

The most prominent sound is appropriately the violin; Holmes’ signature instrument. The music is hauntingly beautiful and reminiscent of “Sweeney Todd,” interesting, considering both are set in Victorian England. But the similarities end there. I left the theater humming the melody to “Look What He’s Done,” when all of London is accusing Doyle of murder.

The events of the play have been altered for dramatic purposes, but I’d like to think that all the little winks and nods to the modern era actually happened, like when Doyle turns to his wife and housemaid and declares, “In a hundred years, no one will remember Sherlock Holmes!” If only Doyle knew.

The Mercury Theater is perhaps one of the most beautiful theaters I’ve had the pleasure to be in. Built in 1912, the Mercury retains that old, turn-of-the century charm, even after its 1994 renovation. The ornate designs along walls easily transitioned into the lovely set that helped bring my mind to the Victorian era.

Because I was sitting next to the air duct, and I had a nasty cold, I started shivering in my seat and rubbing my hands together. That is until a kind usher saw me and offered me a blanket.

Yes, a blanket. And not an old blanket that had been there since the theater opened; the new kind that feel like Cookie Monster when you rub it. It was so soft and warm, I curled up in my seat. I’ve never been to a theater that offered me a blanket.

I’ve seen “Wicked” at the Oriental; “Jersey Boys” at the Bank of America; and “The Pirate Queen” at the Cadillac Palace — all the big name theaters in Chicago. Hand’s down, the friendliest staff I’ve ever encountered is at the Mercury. A bright jewel in the Chicago theater scene that continually offers a cozy experience.