Jackson, Sr. Seeks to Organize Students to Fight for Education and Other Issues 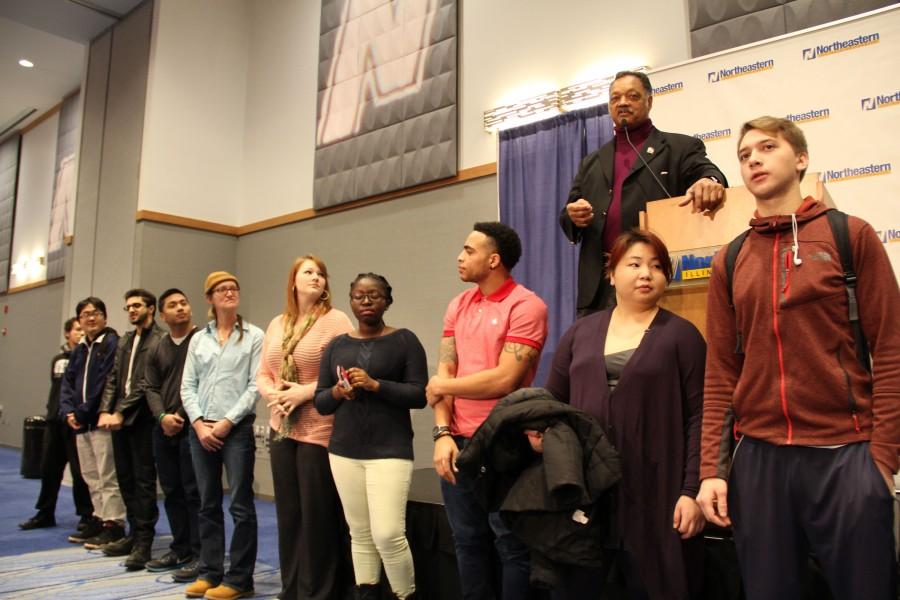 Jesse Jackson, Sr. encouraged unregistered voters to come to the stage and become registered. Ten students answered the call during his speech at Alumni Hall.

Rev. Jesse Jackson, Sr. spoke about the Illinois budget crisis as well as the ongoing water situation in Flint, Michigan to a packed Alumni Hall on Jan. 25. He argued that though the problems exist in different states, the fights are the same.

“There’s a toxic wind blowing,” Jackson said throughout his speech. “What are you going to do about it?”

Jackson’s visit to campus came on the heels of a statement from all nine Illinois state university presidents in a joint letter to Gov. Bruce Rauner, “If a state budget is not approved in the very near future, public higher education in Illinois will be damaged beyond repair and the consequences for the state will be severe.”

Jackson argued Illinois needs to pass a state budget so students, who have a right to education, can continue to focus on their academics. He assured those present that if the system fails, it’s because of its infrastructure and not because of the students or the quality of their education.

Similarly, Jackson said the issue in Flint revolves around a broken system. He likened the situation in Flint to Hurricane Katrina. Jackson disagreed with President Obama’s state of emergency declaration in Flint.

Jackson, a notable organizer, invited everyone to attend a meeting at Rainbow PUSH Jan. 30 to discuss funding for higher education, clean water and forgiveness of student debt among other issues. It is Jackson’s belief that if students, teachers and faculty from the state schools join together, Springfield will have no choice but to listen.

“It’s time to march,” Jackson said. “You can’t police poverty and destruction. You must end it. …You cannot separate this crisis of not enough money for education from too much money for war. We must make some choices.”

To further that mission, Jackson called upon the audience, who he likened in diversity to the United Nations, to register to vote. He challenged all unregistered voters to come to the stage. Ten students stepped up and were then led to a voter registration table.

He feels the key to changing the current political climate is through voting, a message he’s proclaimed for decades.

Jackson reminded the audience that there are often battles that citizens need to fight to change unjust laws or a failing system. He believes when people join together those battles are won.

“There comes a time to fight back,” he said. “Put a face on this pain. …We will mobilize. …You are the key to the change we seek. Whenever young America comes alive, we change the politics; the politics don’t change us. …We will fight to save our future. …It’s time to rally, time to register, time to march!”