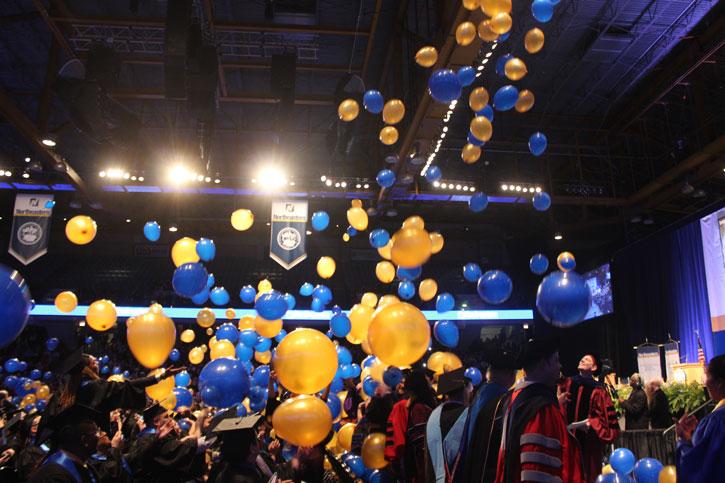 The balloons are released.

The buzz of excitement was unmistakable. Within a sea of black caps and gowns, students donned stoles, honors and various forms of bedazzlement. They marched to their seats, with family and friends watching in anticipation of the ultimate goal: a college degree.

Whether it was a master’s or bachelor’s, each student crossed the finish line and victory took place on Dec. 13, 2015 at NEIU’s winter commencement ceremony held at the UIC Pavilion.

“I am truly honored and very humbled,” Komaiko said, beginning her address as commencement speaker.

“Your academic and personal accomplishments merit you a Northeastern Illinois University diploma and are testament to your continuing philosophy [as a] lifetime learner,” Komaiko stated, as she looked back on her time spent at NEIU and her long and distinguished love of Spanish dance

“The world needs you now” said Komaiko, as she removed her glasses to address the pavilion and conclude. “Join us please.”

Graduate Edgar Torres presented the 2015 Class Gift and congratulated his peers all around him.

“[Thanks] for leaving your legacy at NEIU,” said Torres. “Your efforts and generosity will continue to advance the mission of this institution.”

Student speaker Samantha Sartin then told the graduates her story of being a high school dropout at 16, a single mother of two daughters by the time she was 19 while carrying full-time employment.

“Society and statistics told me that as a high school dropout and single mother, I would never see a college degree,” said Sartin, wiping away tears. “My decision to become a teacher are driven by meeting the needs of children who are often written off by society and are at risk of getting lost in a downward spiral.”

Sartin recalled her experience of obtaining her GED and enrolling in college with a determination to beat the odd against her. She graduated with a bachelor’s in Elementary Education.

Towards the end of her speech, Sartin touched on the emotion of fear and how it can negatively impact a person’s pursuit of achievements.

“Fear places limits on your life by polluting your mind with thoughts of unworthiness, thoughts of doubt and thoughts of lacking,” she concluded.

Yet, her ultimate message was one that can resonate with graduates as they embark on their new journeys.

“I am sharing [my story] with everyone here today to be an example that you are ultimately in control of your destiny,” Sartin said. “Never let anyone place limits on your success and dictate what you can and cannot do.”