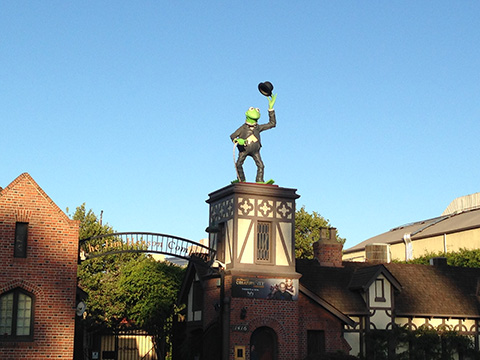 The gates of The Jim Henson Company in California, where Kermit the Frog tips his hat to welcome lovers and dreamers. It's a site I might not have seen without modifying a New Year's resolution./Photo by: Mary Kroeck

According to Statistic Brain, nearly half of all Americans make New Year’s Resolutions. The top resolutions for 2015 included losing weight, getting organized and spending less, saving more. Wouldn’t it be great if all it took was a simple resolution to make these things happen?

Personally, I like the idea of making resolutions, but I don’t think they all need to be made at midnight on Dec. 31. Rather, I think resolutions can be made and changed throughout the year and maybe they should be.

The University of Scranton reports that only about eight percent of Americans actually follow through with their New Year’s resolutions. The reasons for the low success rate can vary.

I know I’ve made tons of resolutions I haven’t kept with the intention I had in mind, but rather than beat myself up about them, I shifted my goals and ultimately felt less disappointed.

One year I vowed that I wouldn’t to go on a trip unless I could go someplace I hadn’t been before. That same year, my partner and I decided to visit his family in California. I’d been to California, but not with him. So, I went anyway.

It was our first vacation together. Sometimes it was frustrating, but most of the time it was nice. Even though we’d both been to the Golden State previously, we did things we hadn’t done before.

We attended The Los Angeles Film Festival, saw a taping of  “At Midnight” and went to Malibu. We went on the Ferris wheel at Santa Monica Pier and walked by The Jim Henson Company Lot. The trip became a series of new adventures and ultimately, I indeed went places I hadn’t been before.

If I hadn’t shifted my resolutions and my expectations, I may never have gotten on that plane. What I thought would happen and what actually happened on that trip were two very different things. In the end, it was pretty great.

I can’t honestly say that I’ve made any resolutions this year. However, I can say that I have goals. My main goal is to graduate in May. Any good thing that happens in addition to that is just icing on the proverbial cake.

Of course I, like most people, would like to lose weight and save more. Hopefully, with that well-paying, steady-income job that so many covet after graduation, those things will come, but I’m also not holding my breath. Rather, I’m making plans. I spent a chunk of the winter break cleaning up my resume. I got myself a new day planner with a gift card I was given and started scheduling things again — trying not to overbook. I’m consciously making choices to not be part of negative environments and conversations. For the first time in my life, I’m learning to be okay with imperfection which, for a perfectionist, is really hard.

Maybe that’s the secret to success — celebrate your achievements, no matter their magnitude, and learn from your errors. If nothing else, maybe we can all resolve to do that a little more.