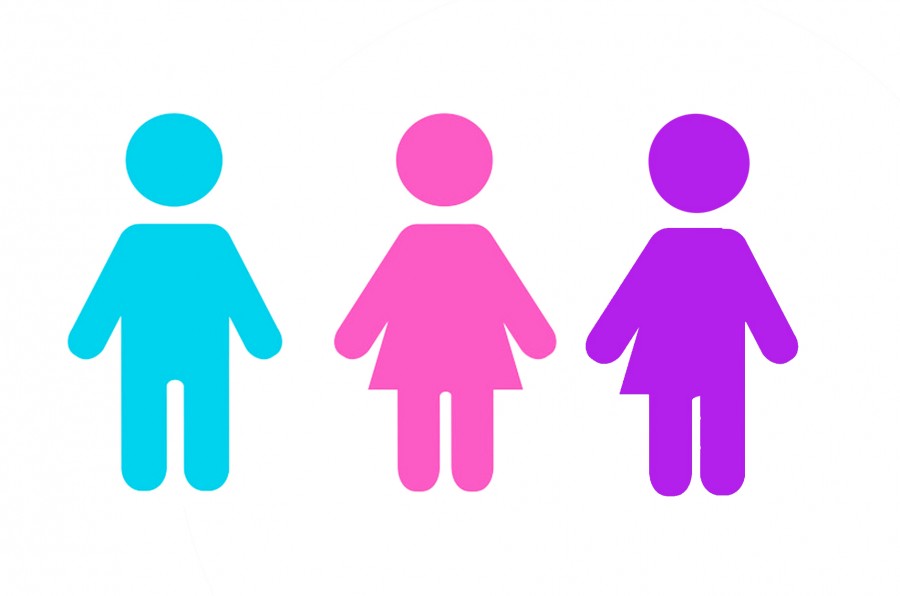 The blue and pink figures depict what society has deemed as man and woman. The purple figure: a woman and man which represent an intersex individual.

In November, Germany became the first country in Europe to be able to allow parents to leave the sex of their child off of birth certificates. The aim is to ease the pressures on parents whose babies are intersex — born with male and female sex organs — to not make their newborns go through the process of removing one set of genitalia over another and allowing the child to make that choice when they get to be older.

However, there is a lot of controversy surrounding this issue. Some people think the new law is a victory. Others think it doesn’t do enough, especially since Germany has not taken the step to allow intersex to be a choice on passports. Granted, Australia has had the option of selecting “x” on passport applications, along with Asia and Bangladesh offering citizens the option of choosing “other” on their passports since 2011. New Zealand did the same in 2012. Nepal and Pakistan have options for a third gender as well and India lists intersex as a third gender too.

So why isn’t America doing the same?

Well, the first thing that’s important to note in this discussion is that sex and gender are not the same thing. Sex, in this case, doesn’t refer to intercourse. It refers to genitalia. Gender, however, refers to whether or not someone identifies themselves as male or female.

Debate.org is hosting an on-line survey about this exact issue. The question posed on the site is: “Should the U.S. legally recognize a “third gender” like Germany.”

As of Nov. 27, 2015, 40 percent of survey takers said “yes,” 60 percent said “no.” Some of those who didn’t think the U.S. should follow suit, stated that adding a third gender is “not practical” and “would be very costly for something that… only affects a small number of people.”

Statistically, that much is true – as far as we know. According to the Intersex Society of North America, one in about 1,500 – 2,000 births. Yet, others taking the poll, ones who believe in a third sex being added have personal reasons for their vote.

One such voter, who goes by the name “Fira” said, “I’m sick and freaking tired of being treated like I don’t exist, and I’m sick of having the wrong letter on my ID. Believe me, there’s more than just that frustration saddles on not having your gender recognized.”

Personally, I think America is obsessed with labels.

Labels create a perception of order. If you’re a heterosexual, gender normative person, it’s fairly easy to check off the “male” or “female” box on applications for anything.

I would even go as far as to say that a lot of people don’t really have a problem checking of their appropriate box or checking off their box for their ethnicity.

It’s just another box; just another label. Yet, in checking off any of those boxes – male, female, Caucasian, African-American, Hispanic, Latino, Asian, Native American, etc. – when you’re forced to only choose one, you close yourself off to everything else that you are or could be because of someone else’s (in this case, the government’s) standards of who you’re supposed to be.

That is true of all people. So, what would really be so wrong with illuminating the labels “male” and “female” and recognizing each other as people?