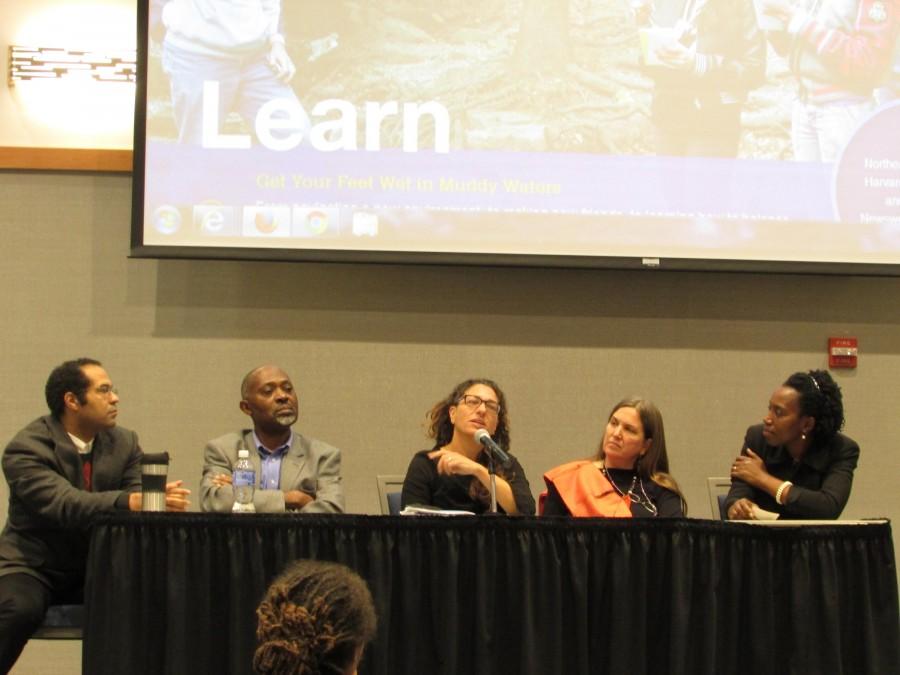 The third annual Genocide Symposium was held in Alumni Hall on Nov. 10 and discussions spanned racial violence directed at African Americans, genocide, terror and diaspora in the African region.

The symposium was sponsored by the Genocide Research Group — a growing collective of researchers and academics, founded by Jeanine Ntihirageza, Teaching English to Speakers of Other Languages (TESOL) Chair, coordinator and associate professor — and co-sponsored by the Office of the Provost, College of Arts and Sciences, African and African American Studies, Justice Studies, TESOL, African and African American Resource Center and Northwestern University.

The Genocide Research Group held a discussion in the afternoon. By 2 p.m., more than 65 NEIU students and faculty, from over 19 different programs, were in attendance.

During the morning, talks focused on: The parameters and definitions of genocide; its residual effects on language, culture and psychology; and the overall impact of genocide on individual, national and global scales.

Members of the group took turns to address the audience about what being part of the group has allowed them to achieve collectively. They shared their stories, along with poetry written by Chielozona Eze, associate English professor, and a rap written by a woman serving a life sentence performed by Susquehanna University philosophy professor Lissa Skitolsky.

Ntihirageza was first to speak during the discussion. She reiterated that the group has been a major proponent of her own healing processes in the wake of her own experiences with genocide in Burundi during the 1970s.

Eze was born in Nigeria and when he was five years old, Nigeria was in the midst of a full-blown civil war. Though much of his experiences and sentiments have been internalized, Eze recounted the early and continuing stages of finding the courage and strength to discuss them. Eze’s wife encouraged him to confront his experiences. He also recognized his colleague, Ntihirageza, for helping him digest and communicate his memories.

Some of Eze’s current research focuses on the “Ethical role in empathy.” There were a few watery eyes in the audience as Eze read three of his poems. A concluding line of one of the poems he shared hit hard, “The past, if forgotten, poisons the village well.”

During the panel discussion, adviser and assistant philosophy professor Alfred Frankowski said (in the context of genocide and its survivors) that, “memory and mourning are two separate phenomena.”

The professor went on to describe how he was surprised, as he never really thought of himself as an activist, to come to the conclusion that as a member of the Genocide Research Group, he was an activist.

“Thinking about the world is a form of activism,” Frankowski said.

It was Lissa Skitolsky’s first time attending the Genocide Research Symposium as a newer member of the Genocide Research Group. After meeting Frankowski, who introduced her to the group, Skitolsky described a sense of relief in learning of people who were, “asking the same questions.” Up until that point, Skitolsky had “asked lots of questions,” but nobody else seemed to be asking them, nor did they express any interest in investigating them. Apologizing in advance for her delivery, she read a rap written by an inmate, sentenced to life without parole.

The final lines Skitolsky representatively rapped for the inmate were “mass incarceration is the new Jim Crow, from the mind of a woman who is free.”

Cris E. Toffolo, chair of NEIU’s Justice Studies department, joined the Genocide Research Group after the first symposium. As an undergraduate in 1981, Toffolo taught high school in Nigeria, where she saw children poisoned by benzyne gas released from mining operations in the Niger Delta region. Tofollo recalled being young and ill equipped with the tools, at the time, to fully comprehend what she saw. What she realized in the following years was she had witnessed the negative repercussions of continued mass environmental neglect by Shell Oil Companies. Toffolo further reasoned that Shell’s negligence was, in fact, a form of genocide.

Shell’s mining enterprises were responsible for poisoning communities and destroying the ecosystem in the Niger Delta region. Greenpeace.org published information in January of this year, which states Shell’s own data accounts for approximately 250 oil spills per year in that region from 1997 to 2006 alone. The people of the developing country of Nigeria suffered immense losses due to Shell’s negligence, yet they are poorly represented, often unrecognized and it can be argued that the compensation is disproportionate to the extent of their losses.

There were several times the room became still as keynote speaker Christen Smith, assistant professor of Anthropology and African and African Disaspora Studies at the University of Texas at Austin, aligned a series of pictures of the acts of terror and genocide occurring in Brazil.

While she reviewed the parameters, definitions and types of representation given to genocide, Smith mentioned several times that she does not subscribe to, and makes conscious efforts to avoid, making genocide “an exotic issue.”

Despite deliberate omission of the more graphic imagery, the crowd got the message through a series of vignettes as Smith delivered her narrative presentation titled, “A Campaign for Life: Struggle Against Anti-Black Genocide in Brazil.”

Deaths occur often in the form of executions and reporting such deaths is inconsistent. In attempts to justify these executions, fabrications surrounding chilling connections between powerful elected officials, civil service workers and militarized police were among what was mapped out in Smith’s talk. The deaths of thousands of Brazilian men, often between the ages of about 19 to 39, are poorly represented in mortality statistics of Brazil.

According to Smith, mortality records are, “voluntarily kept and internally compiled.”

The category “death by resisting arrest” is the catchall accounting for death squad murders and police brutality and their classification as “suicides” is all too commonly misconstrued.

It became apparent that genocide in Brazil has been denied recognition by the Brazilian government and by other nations. It was not until 2005 that conversations really began, “Nobody believed it was genocide in Brazil.”

Recognizing that some of her views are controversial, Smith said, “U.S. accountability sets the precedent for what we consider genocide.”

The deaths of individuals like the son of a React or Die! Campaign member who was found shot, mutilated and buried upside-down in a “clandestine” gravesite. Police forces and justice authorities deemed the area “too dangerous” and refused to go and search for his son when Tony reported him missing and needed their help. Elaborating on her investment in the React or Die! Campaign since 2005, Smith allowed the crowd to interpret the atrocities of black genocide and unprecedented racial violence in Brazil.

According to Smith, The React or Die! Campaign aims to gather evidence and interpret “extrajudicial activity in what (their campaign) is calling genocide.” At the same time that Smith marched with React or Die! in Brazil in 2014, protesters rallied in response to the murder of Michael Brown by officer Darren Wilson on Aug. 9, 2014 in Ferguson Missouri.

Several student attendees at the check-in table outside the event in the afternoon said they were not there because it was required for a course. For other NEIU students, the event was part of the semester curriculum.

Despite the motives of those who participated in the third annual Genocide Symposium, attendees gained powerful insight over the course of the day, as genocide, intent and public secrets were delineated. The series of discussions spoke, at high volume, in the name of disturbingssues spanning racial violence, diaspora, terror and police brutality that have been muted or lacking in representation in the past.