The Fight to Take Back the Night! 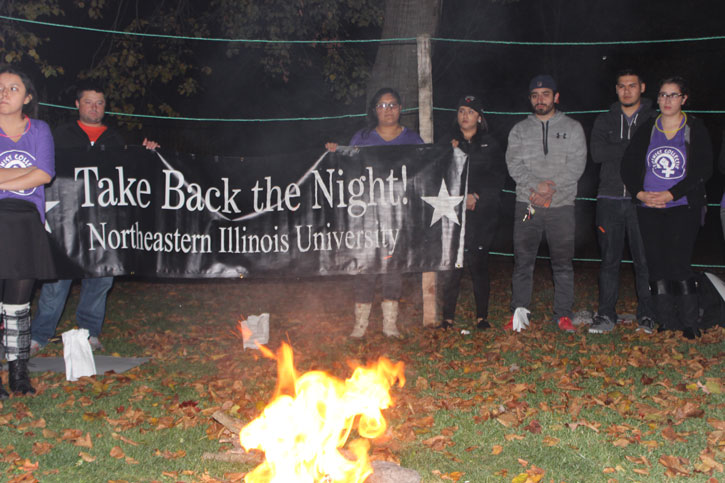 Members of the Feminist Collective hold a banner while participants watch the secrets the wrote burn in the fire.

Violence towards women is something that is difficult to talk about. The Feminist Collective took the first step to bringing about change.
The Golden Eagles room in the Student Union was completely transformed on November 4 in honor of Take Back the Night (TBTN). Take Back the Night is an international organization that organizes rallies, marches and vigils with the goal of ending domestic and sexual violence towards women.
November is the traditional month for these events since November 25 is the International Day for the Elimination of Violence Against Women.
Feminist Collective members showed up in purple T-shirts, the color commonly used in remembrance of domestic violence victims. They placed their creative anti-violence posters around the room and prepared themselves for the first activity of the night: the peace circles.
Feminist Collective members sat in each circle and would take turns asking the guests questions. When it was a participant’s turn, they were given a talking-stick and an opportunity to discuss their experiences with domestic violence in a safe space. Due to the personal nature, what was said in the peace circles were confidential.
Of the things discussed, it was made clear that being aware of one’s surroundings, mentally and physically was most important, while being prepared. Carrying a physical object, like pepper-spray or a set of keys intertwined within the fingers, like Wolverine claws comes in handy, especially when walking around in the dark. It is always better to try and prevent violence and although some situations may be very traumatic, it is best to remember that staying optimistic and confident.
In connection with confidence, the participants of TBTN were treated to an entertaining session of learning self-defense. Experienced self-defense instructor, Martha Thompson, taught TBTN participants more than just self-defense moves and how to feel and appear confident; she made it clear that self-defense is an active form of self-care. Through self-care, one is empowered and one makes a habit of being aware and putting more effort into staying safe.
Once the fun kicking show came to an end, the night morphed into something more serious Encouraging guest-speaker, Crista Noel, opened eyes and minds to the true stories of violence. Stories like Melissa Williams’, who was a passenger in a vehicle driven by Timothy Russel.
A police officer assumed he had heard shots being fired from the vehicle, and because of this assumption, abruptly decided to chase the car down for about twenty five minutes. The chase ended with thirteen officers shooting one hundred and thirty-seven bullets into the windshield, twenty-four of them ended up in Williams. It is events such as these that are not made known to the public as often as they should be.
It is because of the lack of knowledge within such tragic happenings that violence in Chicago is only growing. It is the manipulation that is thrown into titling and reporting crimes that makes it seem as if crime rates are declining when really, they are increasing.
The Feminist Collective and guests of TBTN ended the event with a roaring and purposeful march around NEIU’s campus.
Before the peace-circle kicked off the event, participants were asked to write down something that they had been meaning to let go . After the march, the pieces of paper containing deep, even angry secrets were tossed into a fire and forgotten. As everyone formed a circle, held hands, and shared their final reflective thoughts of the powerful night.