“Get Rhythm” in the “Ring of Fire” 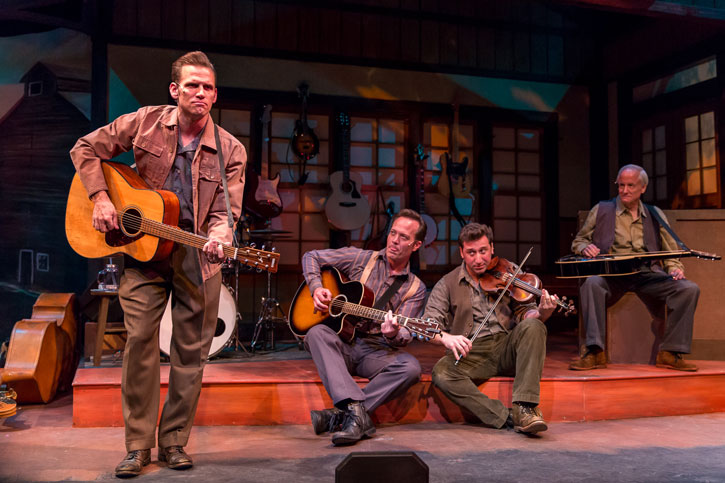 courtesy of the Mercury Theater

Every light was directed at the stage. Vibrant colors and a rustic scene brought the old Grace Station to life. An excited hush fell throughout the Mercury Theater, ready to hear the story of the “Man in Black:” Johnny Cash.

“Ring of Fire-The Music of Johnny Cash,” directed by Brian Russell, is a take its audience on a tour of Cash’s life. Set in the imaginary Grace Station, Angela Miller, set designer, created a welcoming and lively place where music became magic.

The highlights of Cash’s life were intertwined with more than 30 of his hit songs. Among them were crowd favorites such as “A Boy Named Sue,” “Folsom Prison Blues,” “I Walk the Line” and “Cocaine Blues” mixed seamlessly in with important moments, including when Cash’s music career launched, the loss of his brother, when he met his future wife June Carter and his dark times with drugs.

One part musical, one part concert, “Ring of Fire” takes a tip or two from other shows such as “Jersey Boys” or “Million Dollar Quartet” and present a musical documentary of sorts onstage, creating a unique experience.

The Mercury Theater required the cast of “Ring of Fire” to preform close together on stage. The cast of eight proved that less is really more. Each actor always had an instrument on hand; electric and acoustic guitars, harmonicas and a bass fiddle where present in each scene.

Kent M. Lewis played an older Cash and introduced the new facets of Cash’s life to the audience in a short dialogue before each scene. Behind him, the other actors prepared the next scene. Cory Goodrich as Carter and Michael Monroe Goodman as young Cash brought the legendary duo to life.

Together, they performed the moments shared by Cash and Carter, on and off the stage, and the love they shared for music and each other. The rest of the on-stage cast served as a live band who accompanied Cash on tour and members of the Cash family according to the demands of each scene.

A few “ooo’s and ah’s” were heard from the audience, followed by a few chuckles, as they became a part of the show. Some couldn’t help stomping and clapping to the beat of Cash’s tunes. A fitting tribute to the man who walked the line.