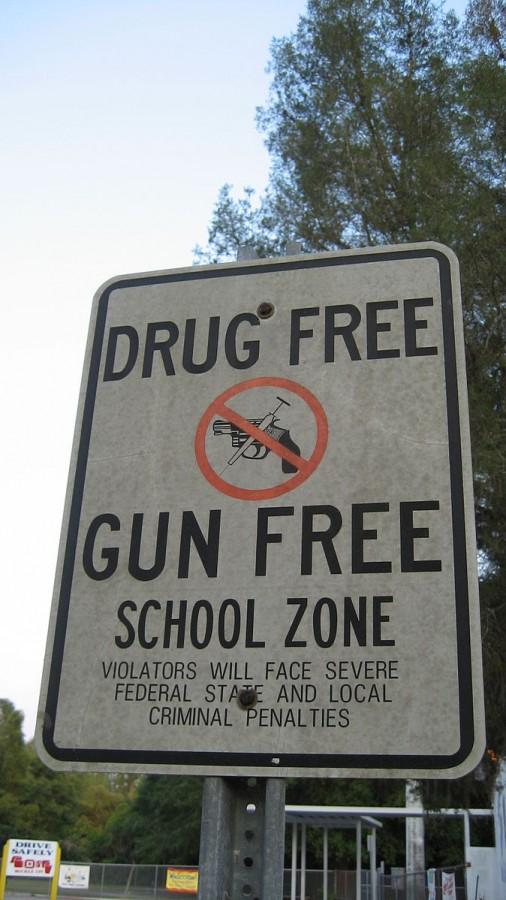 A drug free and gun free sign posted near a school zone.

Police belong on the streets catching criminals and not in schools enforcing dress codes. I would even go so far as to say they don’t belong on any school campus, including universities. Having security is one thing, but a sworn officer of the law belongs in one place: The place where the law is being broken.

Where is that place? It’s Chicago, pick a neighborhood. Back in the day, cops used to have a beat. They walked around and spoke to people. They were faces in the neighborhood. They also got out of their patrol cars in order to give tickets. Cops were people with badges, not headlines waiting to arrest, beat or kill.

The rise of the School Resource Officer (SRO) has given cops a new beat. A beat full of drama, hormones and potential criminals. Recently, a girl in South Carolina was body slammed and beaten, a boy in Texas was arrested and verbally abused, and a 16-year-old boy in Oklahoma was assaulted by SRO’s.

According to the Richland County Sheriff’s Office in South Carolina website, “The SRO program is a community policing approach practiced within a school environment. In our middle and high schools one officer is assigned to one school. In our elementary schools our officer’s cover two to three schools teaching the D.A.R.E. curriculum among other lessons. Generally speaking, this provides the maximum benefit for the school and the sponsoring law enforcement agency.  The school becomes the officer’s beat.”

WHAT?! The list of things wrong with this statement is endless. How about the fact that there is one officer “teaching” curriculum among other lessons in between one and three schools? How about the fact that it is a “community policing approach practiced within a school environment?” As a parent, the only thing I want practiced within a school environment is math, science and reading, etc. and the only thing cops should be teaching is nothing because they aren’t teachers.

The Department of Justice describes the roles of an SRO as “Law Enforcer, Informal Counselor, Educator, and Emergency Manager.”

That’s essentially four separate jobs in one person trained for two to four years to hunt down criminals. This is asking a lot from a teacher with at least bachelor’s degree in children, let alone an officer who may or may not even like kids. They might as well be teachers with guns.

Chicago Public Schools (CPS) careers page lists exactly eight current openings for “police officers only.” These listings range from part-time security to simply off-duty police officers. Also according to the page some of the duties “may include, but are not limited to office support, opening and closing out the school day, data entry, filing and answering phones.”

Their placements are at six elementary schools and two high schools on various ends of the city; all of them are in heavily Hispanic or black neighborhoods. However, CPS lists 115 that involve security in some fashion.

Police belong on the streets to be summoned when they are needed. They should not be on-call in a school just waiting to spring into action. Spring loaded SRO’s are dangerous. In a “good school” they can become bored and in a “bad school” they are on edge.

Either way, the slightest thing can trip the spring and release them onto a population of young developing minds who are still testing the boundaries of discipline. It also puts a lot of power in the hands of an individual who is not trained to develop a healthy set of boundaries.

Police are imbued with power by handing them a badge and paying them to prowl. By condensing their territory you have caged a lion with a herd of young, wild antelope and are waiting for someone to get hungry enough to eat.