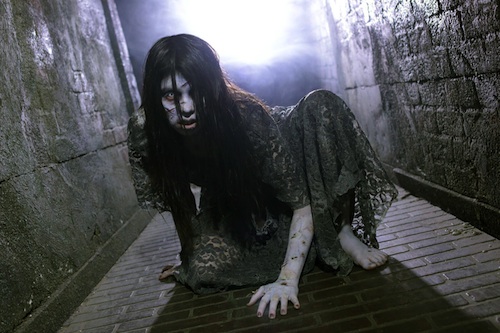 Courtesy of House of Torment

One of the many creatures that awaits inside the house.

I’m a total pansy. I admit it. “Fright Night” made me pee my pants. But haunted houses generally suck. Unless they’re House of Torment.

Now, while the name may sound like a 70s B-movie, House of Torment is a really good haunted house. It’s perfect for someone like me who gets scared a little too easily, because it’s not too scary. But according to my friends who aren’t complete scaredy cats, they too were scared.

House of Torment is split into two attractions, each about ten minutes long, and unlike most haunted houses, I was genuinely scared. My heart raced, my palms sweated, I actually hid behind my boyfriend, clutching onto him as my human meat shield so the monsters that chased us down a realistic subway car didn’t get me.

Since I am an admitted lily-livered jellyfish, you’re probably thinking, “Why should I trust you? You get scared easy.”

Well…because I have been to my share of haunted houses and they suck. There I said it. They suck. I went to Rob Zombie’s experience last year. And it was bad. I didn’t scream once. It was cheesy, the makeup was lame and the sets were boring. Fright Fest was scarier.

House of Torment was incredible. The props and sets were beautifully constructed; I mentioned the subway car right? Now add the perfect amount of fog to a bookcase maze where you can kind of see the exit but you have goblin zombies chasing you. Terrifying.
Bryan Kopp, general manager at House of Torment Chicago, described the first half, subtitled Contagion, as a “post-apocalyptic Chicago ruined cityscape where the undead and monstrous Nemesis has once again begun terrorizing planet Earth”.

The Abandoned, the second half, is an old abandoned high school crawling with nasty creatures ready to pull you into eternal detention.

And the make up; A. Maze. Ing. It was Hollywood quality and perfectly applied and genuinely scary. The haunters, someone who works in a haunted house Even the people who were standing in line with the patrons were dedicated, offering plenty of entertainment while we waited in line.

I was scared, but I wasn’t so scared that I had nightmares after. After we got out of the first half, I was disappointed. I said, “Wait, it’s over?” It wasn’t done.

Then we got in line for the second half and I was back doing my happy dance.

It was the perfect balance of adrenaline-pumping scary and just plain old fun.

House of Torment is a nationally acclaimed haunted house brand and deservedly so. With only a half an hour wait, it offered reasonably short lines, fairly priced tickets at $30 a pop and plenty of treats with their tricks.

Located in Morton Grove, we can expect House of Torment to return next year, for an even more wickedly devious attraction.