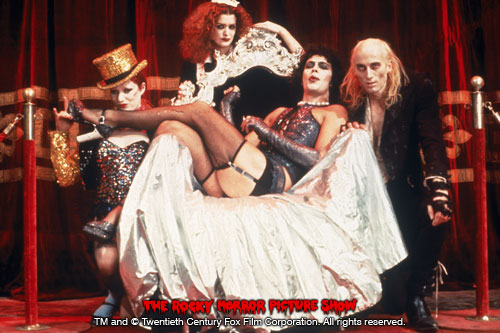 Viewers will find a houseful of wild characters in this cult classic.

It started with a dance party. The line to get in the intimate theatre moved quickly. The virgins had been marked for sacrifice and nervously awaiting their fates. 50 or 60 audience and cast members danced in the aisles to 70’s classics.

On a street nearby others drank and danced to their modern hits and wore pop culture costumes. As the dance party raged, the different costumes in the crowd became clear. More and more people filed in joining the dance party after carving out a seat or two. As is neared midnight the crowd grew and the experience really began.

The MC, also decked in costume, called the assembly to attention with a smattering of swear words and other colorful language. He laid down the rules for the crowd. “Rule one: no lighters or open flames of any kind. Flaming is fabulous!! However, don’t set [email protected]#$ on fire.” After the rules, a costume contest and then a selection of virgins were ‘sacrificed’ for the greater good. After the sacrifice, the real show could begin.

The midnight madness presentation of Rocky Horror Picture Show at the Music Box theatre at 3733 N. Southport Ave. has been a tradition for many for the last 14 years. However, the audience participation portion of the show dates back to about 1976. Shortly after its U.S. premier in 1975, it went from satirical science fiction to cult classic phenomenon.

The film, Rocky Horror Picture Show, starring Tim Curry, Susan Sarandon, Meatloaf and so many others celebrates its 40th anniversary this year. Essentially, it’s about sex crazed aliens living in a spaceship shaped like a castle. Those who have either never seen the movie or only seen it on DVD or Video are called Virgins. At the Midnight Madness presentation Virgins are marked upon entering with red lipstick “V’s” on their cheeks.

The cast and crew sell prop kits in the lobby and promote audience participation throughout the show with call backs and a floor show. Each kit includes everything you’ll need to throw, pop and glow during the show.

This year I took my boyfriend who never ever watches movies or television shows. I gave him no clues at all as to what was going to happen or what to expect. I’m almost positive he thought we were going to see a scary movie until he walked in on the dance party. He was marked and sacrificed with the other virgins. All in good fun and, of course, for the greater good of mankind.

The floor show was made completely of a volunteer cast and crew. They put on monthly performances at the Music Box and collect donations afterward from giddy and titillated audience members. I enjoy Halloween performances better because when you go outside the theatre it’s almost as if the party from inside is still going. The walk to the train seems less lonely when you’re not the only one on the street in costume.

As the doors to the theatre released the excited crowd on to the streets, many of the area bars were releasing their own captive audiences on to the street. The collective march to the CTA and beyond made for instant friends between dressed up city-dwellers. Everyone had clearly had a good night.