Half A Life, But a Whole Heart 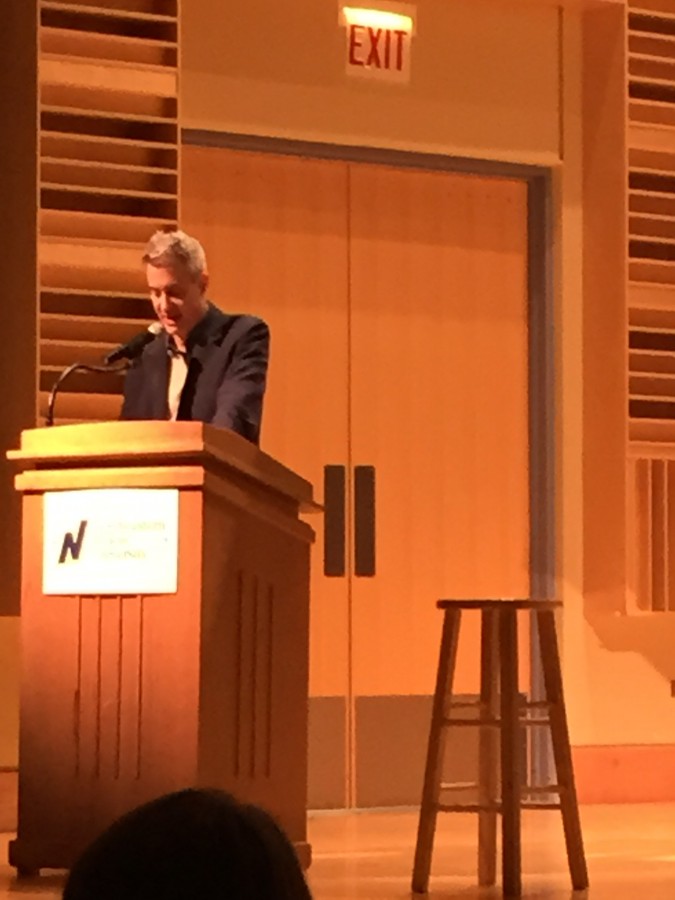 Darin Strauss reads from his book.

“Half a life ago, I killed a girl,” began internationally-bestselling writer, Darin Strauss, as he read the first line from his memoir, “Half a Life.”

Published in 2010, “Half a Life” details the far-reaching ramifications of the tragic moment when a female classmate riding her bike, swerved in front of Strauss’ car and he killed her. Although police determined that the accident was unavoidable, much of the book follows Strauss as he spends much of his life blaming himself and coming to terms with his responsibility.

“The temptation with a memoir often, is to forgive yourself on every page,” answered Strauss, when asked about the craft of writing a memoir. “You have to sort of be the opposite. You sort of have to be the prosecutor and ask yourself at every turn, you know—‘Was I doing the right thing? What was I doing wrong with my character there?’—because you have to see yourself as just a character.”

The cathartic process of writing the book helped Strauss heal the guilt and shame he carried for decades about the accident.

The idea for the book grew out of an appearance of “This American Life.” In 2008, Strauss guest starred on an episode entitled “Life After Death” where the writer talked about the effects the accident had on his life. In the book, he expands on that and in 2011,”Half a Life” won the National Book Critics Circle Award.

Strauss is best known for his novels “Chang & Eng,” “The Real McCoy,” and “More Than It Hurts You.” His work has been recognized by “Newsweek,” the “Los Angeles Times,” the “Chicago Tribune,” “NPR,” and even the “New York Times'” prestigious column “Notable Books.” His books have been translated into 14 languages and published in 19 countries.

He is an associate professor at NYU’s creative writing program.

Strauss’ reading was part of the Visiting Writers Series, a popular event where bestselling authors from around the world come to NEIU to read their work and partake in a discussion. This year marks the fourth anniversary of the event that grows in popularity with each semester.

The series is curated by NEIU assistant professor in English Alicia Erian, author of the novel “Towelhead,” sponsored by Academic Affairs and produced by the Office of Cultural Events with promotional support from the NEIU Art Department.

Strauss was the second writer to appear this year, out of six, each seemingly more powerful than the last.