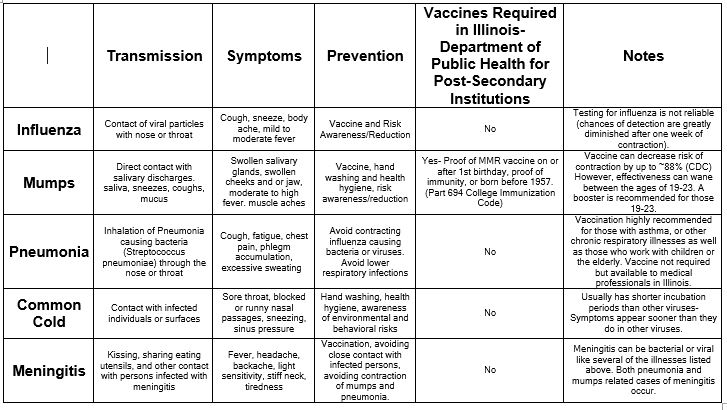 The above chart displays information on viral illnesses college students should be aware of.

The risk of contracting viral illnesses increases for the NEIU community in the fall, when activities shifts indoors and stress from the semester builds.

Strains of viral infections that students and faculty could encounter this season include, but are not limited to — mumps, influenza, pneumonia and meningitis.

Beginning in July, the University of Illinois at Urbana-Champaign started to report record numbers of mumps cases on their campus. At the time of the survey there were 73 cases in the state with 50 of those cases being on the Urbana-Champaign campus.

By August, the statewide number of cases reached 98. By September it was up to 110. As of Oct. 6, the number of mumps cases was up to 200 according to Illinois Department of Public Health, over 100 of those cases being on or connected to the Urbana-Champaign campus.

NEIU officials announced last week a suspected case of mumps at the El Centro campus. This followed the announcement of a second confirmed case of mumps on the main campus at the beginning of the semester.

The Centers for Disease Control and Prevention (CDC) states that viral cases of mumps are no longer common in the United States. Generally, only a few hundred confirmed cases are reported each year. Since 2014 the reported number of cases dipped below 1,000.

Though a great deal of data exists on viruses in the US, it does not reflect the number of deaths specifically caused by the mumps virus in cases of flu-like illness. Though deaths can be linked to complications and secondary illnesses in tandem with influenza (such as lower respiratory illness or heart failure), diagnosis for influenza is unreliable at this time and reporting is inconsistent. Thus, influenza related deaths are not required to be reported by the state.

Dr. Emily Rumschlag-Booms, a biology professor and microbiologist at NEIU, studies an avian strain of influenza known as the H5N1 strain. The viral attachment of the H5N1 strain and its transfection or transduction — entry/incorporation — into a host cell is the current focus of her work.

The H5N1 strain is one of the many viral strains of influenza. New strains of the flu are a constant public health concern for susceptible individuals.

“There is no vaccine currently available for the H5N1 strain of influenza,” Rumschlag-Booms said.

Under the guidance of Rumschlag-Booms, undergraduate students run experiments to analyze H5N1 viral particles and their attachment and entry into human kidney and lung cells.

“(Students) are able to connect to the field on a larger scale,” Rumschlag-Booms said. “Even at a small teaching institution, we can make an impact (in public health and STEM). It is not so far reaching to say the research they conduct today may have a real impact for the field in the future.”

Rifka Joly, a senior chemistry major working with Rumschlag-Booms, explained how her view on the prevention of influenza epidemics influenced by her research.

“Before (my) research, I didn’t know about the mechanisms viruses use to infect humans or how a virus may start as a strain that just infects animals,” Joly said. “But it can cross the species barrier and infect humans. So we should definitely be more aware of the risk of flu epidemics and protecting ourselves every season.”

Universities in Illinois and Chicago have limited regulations regarding the protection of students and faculty from risk of contracting viral illnesses like mumps and influenza. Illinois students entering college or university are generally required to show some proof of immunization, but the discretion falls on the institution and governing municipalities.

At this time, NEIU’s Student Health Services do not require immunization records.

For students unsure of their immunization status, NEIU Health Services Nurses Catherine Kuenstler and Catherine Schacht recommend a titer blood test. A titer can help confirm an individual’s immunity to viral illness. They encourage students who are feeling ill to call or stop by to have their questions answered.

Students who take the necessary precautions to limit the risk of contracting viral illnesses are also preventing the spread of an illness.

Student Health Services provide free flu shots for any student making an appointment on the main campus. Of the 150 flu vaccines purchased using funds from the health services fees, they have so far immunized approximately 50-60 students for influenza.