A Fire for Peace at NEIU 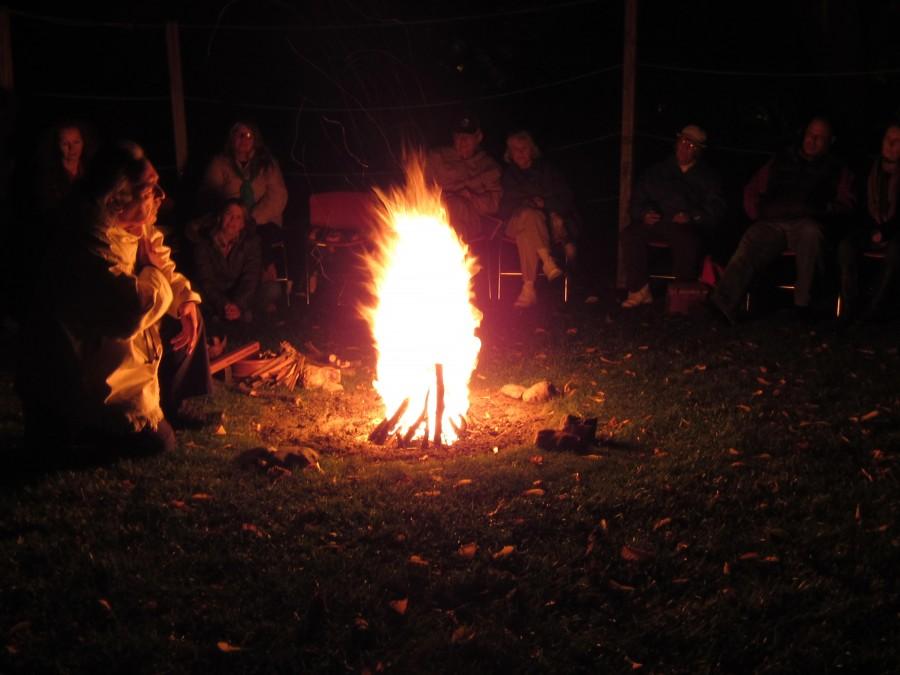 The fire burned with the shaman’s message of peace and love for all mankind.

The peace fire ceremony was hosted by retired NEIU professor Dan Creely at the fire circle just north of NEIU’s physical education building. Creely explained to everyone gathered at the peace fire ceremony that Uncle — a nickname for Angakkorsuaq derived from the English translation of his name: The man who looks like his uncle — is connected to NEIU through Jane Goodall, a friend of his who had previously attended NEIU for
another peace fire ceremony.

The ceremony included traditional singing in the Kalallit native tongue above a fire in which everyone was asked to take a piece of string, unweave it into a ball of puff and put it in the fire.

Then Uncle took a small handful of tobacco, held it up, and chanted in his native language as his father had done times before.

He translated for the crowd: “I hold in my hand, the sacred medicine of the earth, and I lift it up to you as far as I can reach so you see so that I am in a good way. I touch my heart and I touch this land, this beautiful land of Chicago, and I offer this medicine of the earth to this fire and pray that all will be well for time and time to come.”

NEIU President Sharon Hahs and her husband were among those in attendance. Creely thanked her for having attended the peace fire every year since becoming president of the university.

Alongside the tobacco put in the fire, two letters relating to NEIU — the targeted announcement on the recent school shootings and the budget letter from the Board of Trustees to the Illinois Legislature — were sent into the flames as well.

Uncle related a story of hispeople. In Greenland there are stretches of time during winter with no sunlight. During these times ceremonies such as this one are held.

“The Great One, who created you and I, wanted you and I to behold each other’s beauty at all times,” Uncle said. “But for some reason he created night, where there was no light. And this is where the fire comes in.”

This tradition stretches back thousands of years. Uncle’s father was also a fire keeper for his people. He said that his father had taught him to conduct the fire ceremony when he was a young child.

Uncle was asked by his people in 2009 to bring the sacred fire back to his people. He was also able to represent his people, the Arctic people, at the United Nations according to Creely.

Uncle’s work has brought him to five continents, totaling 67 countries where he has held other Peace Fire ceremonies, sweat lodges and workshops with hopes of spreading awareness of humanity’s impact on the environment.

The day after the ceremony he went to the 2015 Parliament of the World’s Religions, which took place in Salt Lake City, where he was asked to give call to action and close the conference.

Judi Macy, who has worked with Uncle for 12 years, said that he “lives in ceremony,” though he sometimes tells her he feels apprehension before such big events.

At NEIU’s peace fire, Uncle embraced each person who greeted him and planted a kiss on his or her cheek.

He held no physical indications of such apprehension.

Judy Meister, a member of the Ojibwe Tribe, also performed a small ritual before the end of Uncle’s ceremony. On a small stone she took a burning ember and used its smoke to honor the seven directions: east, west, north, south, our mother earth, the creator and the within.

Everyone faced each direction as she chanted a prayer of thanks in Ojibwe. And then to honor the last — the within — she came around and wafted the smoke from the ember to each person in the circle.

“My grandmother said that ‘In the circle you can never be put down. No one can ever speak about you (behind) your back. No one can ever back-bite you or belittle you,’” Uncle said. “Can you imagine learning to live like that in Chicago? Wouldn’t that be amazing?”

Margret Meiser, who also worked with Uncle, described him as a “wonderful, amazing, healing man…and funny, too.”

Uncle demonstrated this sense of humor when he explained the beauty of the circle, wondering what it would be like if everyone learned to live as though they were in a circle — seeing only the good and beauty in others — when he said, “Now, I am slightly different than most of you. I am very lucky…I use L’Oreal. You can’t really see that I use it, it’s so well done.”

A chorus of laughter emerged from the crowd.

Uncle finished his ceremony by taking holding tools, two large panlike circles over the fire. He started to sing again. This time, he went around to each person, bringing the tools to either side of his head. Then he moved around the circle until he had met, in song, face-to-face with everyone gathered there.

When he had finished with this, he spoke on his parents. They had come to Chicago in 1979 and smoked the peace pipe with the Ojibwe people during a conference where 75 other nations attended.

Uncle concluded the ceremony by inviting everyone involved to Greenland in 2017.

“Come and visit me,” he said. “Only bring your shorts, don’t bring your coat, because it will be in July.” He received another laugh from the crowd. He was referring to the full moon ceremony under the midnight sun.

There were more embraces as the ceremony ended and all went to thank Uncle for coming to NEIU.