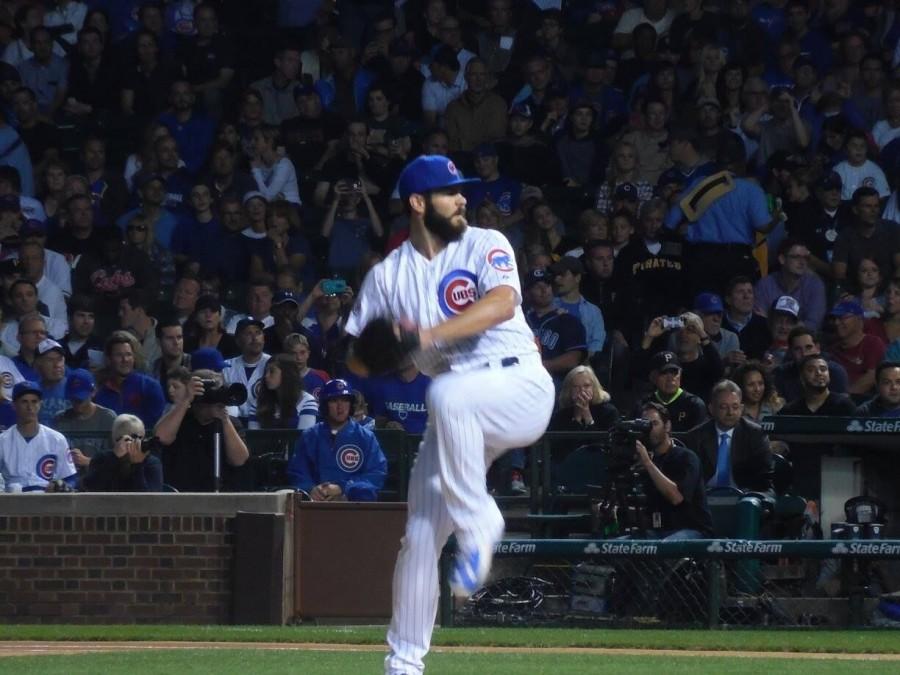 Since the All-Star Break, Arrieta has only given up nine runs in 107 1/3 innings leaving him at a 0.75 ERA, the lowest after the break in Major League history.

When the Cubs traded for Jake Arrieta in 2013 — an “eternal prospect” as one Yahoo sports writer called him — only General Manager, Jed Hoyer, and President of Baseball Operations, Theo Epstein knew of the potential he had to become an ace.

As the starer for the Baltimore Orioles on Opening Day in 2012, Arrieta struggled to become the mainstay of the O’s rotation and was sent down to Triple-A — his fourth year in the minors. Amidst turmoil with Baltimore’s front office, Arrieta was part of a packaged deal with reliever Pedro Strop in exchange for starting pitcher Scott Feldman and minor league catcher Steve Clevenger. He brought with him a 5.46 career earned run average (ERA) and just as much skepticism. However, Arrieta remained in good spirits.

“I said this when I was with the Orioles, I know I can pitch at an extremely high level consistently in this game at this level and it just hadn’t happened yet,” Arrieta told MLB.com’s Carrie Muskat in July 2014. “I knew it was going to happen — no doubt in my mind. It was a matter of how to find it, how to unlock it and how to finally get it to come out. I’ve started to be able to figure it out.”

A year later, it’s safe to assume Arrieta figured it out.

By all accounts, Arrieta should be the favorite to win the 2015 NL Cy Young if it weren’t for the Dodgers’ Zack Greinke who owns a league-best 1.66 ERA.

Arrieta and Greinke have been the best pitchers in the NL for the better part of the season, but what Arrieta has done since the all-star break is astonishing.

Before the break, Arrieta was 10-5 with a 2.66 ERA. Respectable numbers, but by no means Cy Young worthy when Grienke was 8-2 in 18 starts with 1.39 ERA. Since then, Greinke won 11 of his last 14 starts while letting up just more than two runs a clip. Arrieta is 12-1 in 15 starts with a 0.75 ERA with two shutouts and two complete games, one of which was a no-hitter on national TV against the Dodgers while Greinke watched from the dugout. Combining his numbers from August, September and his lone start in October, Arrieta is 11-0 with a 0.41 ERA. His last loss was July 25 when Cole Hamels no-hit the Cubs.

What may have iced the NL Cy Young for Arrieta was his start on Sept. 27 against the Pirates, the team he is scheduled to face on Oct. 7 in the first round of the playoffs. In this particular September game, Arrieta brought a perfect game into the seventh inning against one of the best teams in baseball. His line: 84 pitches, nine strikeouts, and only one hit allowed.

Starts with those kind of numbers became the norm for Arrieta, and the expectation from Cubs fans. His consistency all year is what should make him the NL Cy Young Winner. In the 14 games Arrieta has started following a Cubs loss, he is 10-1. His ability to stop the Cubs from slumping and halt losing streaks is arguably a big reason as to why the Cubs were actually contenders for the playoffs this season.

Considering the struggles Arrieta had, he wasn’t supposed to be this good. Otherwise, the front office wouldn’t have signed Jon Lester. As a matter of fact, the Cubs aren’t even supposed to be this good yet. When Epstein joined the front office, he said he Cubs were expecting to begin a playoff push in 2016. Meanwhile, they are a year ahead of expectations as the Cubs have the third best record in baseball; an MVP candidate in Anthony Rizzo; the NL Rookie of the Year frontrunner Kris Bryant; their first 20-game winner since 2001; and quite possibly, their first Cy Young Winner since 1992.

With Arrieta on the mound, it’s finally safe to say: next year is here.