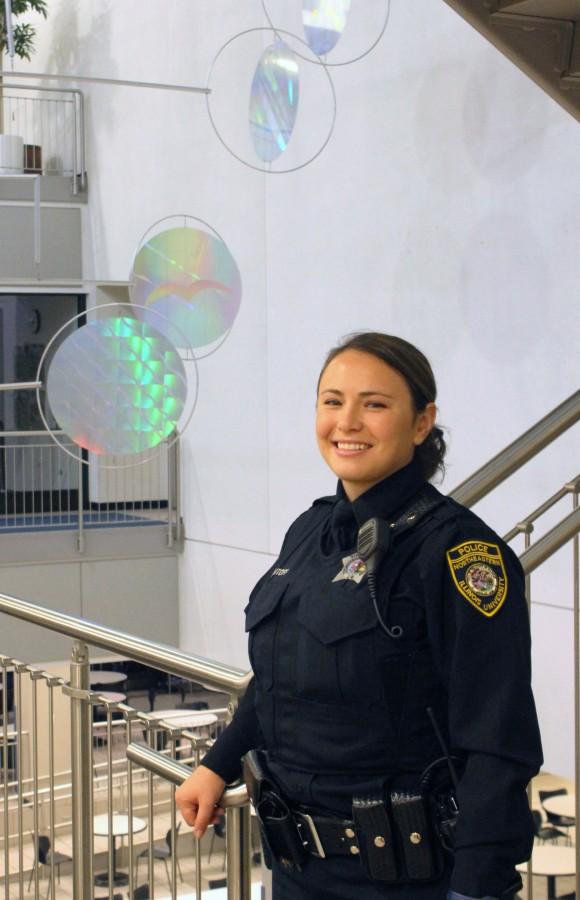 In this latest installment of Meet the Police, the Independent sat down with Patrol Officer Alina Ignatoff who works the night shift at NEIU.

Independent: What is the craziest thing you’ve ever seen or has ever happened during your shift?

Ignatoff: During the night shift, there’s not a lot that goes on because we have very few faculty or students on campus. We don’t really see a lot of crazy action except for when we assist Chicago (CPD) with their calls.

There was that shooting, it was north of Foster and I was working that night. It was a couple of months ago — maybe five months ago — someone got shot and it was on the city’s streets but it was close enough to campus where we went there and helped looked for (bullet) casings from the shooting. That’s probably the craziest thing I’ve done.

Independent: Does that happen often?

Ignatoff: No, no, that’s why that’s the craziest thing that’s happened since I’ve been here.

Independent: How long have you been with NEIU?

Ignatoff: A little over a year…since June of last year.

Independent: What keeps you motivated?

Independent: What did you do before working at NEIU?

Ignatoff: Right before I started working here I worked as a prevention educator for a rape crisis center. I did presentations on child and adult sexual abuse from kindergarten to college-age students.

Independent: Is that something you’re really passionate about?

Ignatoff: Yes, and I actually try to do that here too. What I try to do here is go to a lot of trainings for sexual assault and sexual abuse investigations so that if we ever do get a case here, (we’d be) well trained and qualified to assist anyone it may happen to.

Independent: Did you always want to be a cop?

Ignatoff: No, I decided I wanted to be a cop when I was in college. I knew that I wanted to do something where I can help people and be able to be active and not sit at a desk all day. I did an internship with a police department and I loved it. I loved being able to be out on the streets, drive around, talk to and get to know people and also just be able to assist people if they’re having a bad day or if they’re having a good day.

Independent: What do you like to do in your spare time?

Ignatoff: I volunteer at the crisis center so I’m a rape crisis advocate for them. I respond to hospital calls. If someone goes into the emergency room in the northwest suburbs, I’ll respond there and just be an advocate for the victim as well as (working) their hotline. I also really enjoy going hiking and backpacking. I love to travel.

Independent: Were you born and raised in Chicago or Illinois?

Ignatoff: I was born in a little country along the Caspian Sea, south of Russia. I moved here when I was three and I was raised in the Chicagoland area. I speak fluent Russian. It’s a cool skill to have especially on a diverse campus like ours.

Independent: Is the school really haunted?

Ignatoff: (laughs) Not that I know of. I haven’t seen anything yet.

Independent: If you had any message to give to NEIU students, what would it be?

Ignatoff: I would tell the students not to be afraid to approach the officers. We really try to make it a positive community here and build relationships with the students and staff. And we want to be able to let the students know that we are approachable and that we are able to help them and not be worried to come and talk to us.