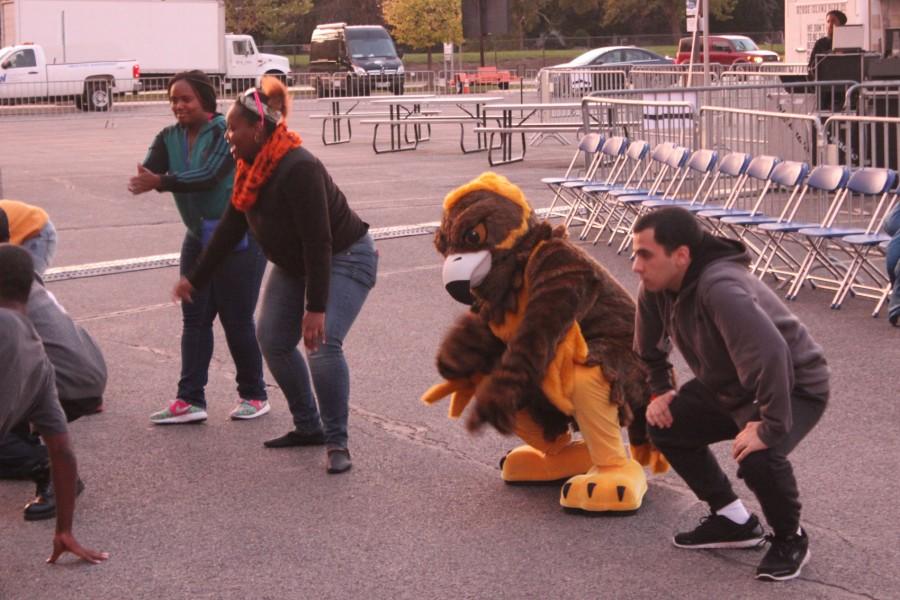 Goldie gets down low with students.

Once you go golden, you never go back. As part of 2015 Alumni Reunion, NEIU invited students, past and present, faculty, staff, and of course their kids for a weekend full of activities ranging from informative, to pure fun. The alumni centered weekend kicked off like any homecoming should, with a party.

The first ever Homecoming Block Party began at 4 p.m. on Friday in Parking Lot F on the Main Campus. DJ Kesh spun his beats and kept patrons flowing through the closed off parking lot. Chicago’s own Goose Island provided $6 beers to go with the waffles-on-a-stick. About 150-200 people floated in and out of the beer garden according a Goose Island employee.

Students representing the campus’ clubs and organizations greeted partygoers fresh from Friday evening classes. Venders filled their tables with jewelry, piñatas, cupcakes and Mexican sweet breads. Children showed off their freshly painted faces as they slid down inflatable slides and begged their parents for to cover their waffles-on-a-stick with chocolate syrup, whip cream and sprinkles.

Willy Dynomite then took the stage and played some of their original soul music. The 10 piece band was founded by three NEIU alumni. Current student, Carson Hooley, kept the rhythm going on drums as evening fell.

Ensemble Español wrapped up the night with a celebration honoring those who have danced with the program throughout its 40 year journey. A cocktail party was held in Alumni Hall, offering beautiful performances and a chance to meet the entire company of Ensemble Español.

The striking duet by Tarah Ortiz-Durnbaugh and Michelle Reid were the talk of the evening. A piece called “When I see me… I see you” featured the veteran dancers who have been with the company for six seasons and two seasons respectively.

The celebration continued on Saturday morning with brunch at El Centro, celebrating the first year since the campus opened. The partying atmosphere of the previous night was replaced with student-led tours, workshops and development classes. Topics ranged from public speaking to “Creating an All-Star LinkedIn Profile”.

The fun continued with the final event, a terrace party at the Chicago Fire game in Toyota Park, where alumni and friends cheered the soccer team to a 3-1 win against the New England Revolution. The perks of being an alum.