Hey, DEADBEAT, This is Thursday Night Live at NEIU 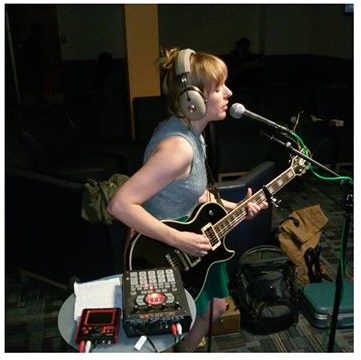 The WZRD never fails to impress the underground music scene with weekly Thursday Night Live (TNL) sets. The past TNL performance brought DEADBEAT on board, an experimental psychedelic rock band from Chicago.

As the band proceeded with their set up and warm up, the lights in the student lounge dimmed and the set was illuminated with stringed lights. Their performance was continuous, building from one song to the next. And with every guitar strum and sound sample, the creativity of DEADBEAT unfolds.

DEADBEAT is a band who was brought together by Jessica Risker. Risker has done solo acts along with sharing the stage as a member of DEADBEAT.

The members of DEADBEAT are Risker on vocals and guitar, Adam Wiebe on drums, Joshua Wentz on the portable keyboard and synthesizer, and Jarrett Hothan on bass guitar.

The history of DEADBEAT begins with Risker. Risker first started Absinthe & The Dirty Floors (ATDF) as a solo act in 2009. Wiebe and Wentz joined soon after to become a four piece with the addition of guitarist, Matt Harting. ATDF released two EPs and played shows in Chicago’s Bottom Lounge and Empty Bottle.

During the time Risker was a part of ATDF, she started a new side project, DEADBEAT. ATDF dismembered when Harting left Chicago for Los Angeles. DEADBEAT would later become the band it is today with Risker, Weibe and Wentz and the new addition of Hothan. They began performing together last year in July.

The distinct sound of DEADBEAT experiments with vocal and sound samples, fusing them together to create a psychedelic, folk style. Each member of DEADBEAT contributes to its unique sound.
“Bass and drums sections are pretty rockin,” said Wentz to WZRD.

Hothan added, “We like Papa Roach, we like anyone who was in Ozzfest in 1999.” Ozzfest included bands like Deftones, Slayer and Pushmonkey. The psychedelic ‘70s vibe is influenced by Wentz, who has a knack for “synths” and anything electronic.

“To me the band stuff is more about creating an atmosphere and just kind of a beat, a little bit of experimentation, but maybe, hopefully not too much, so it still has some structure to it,” said Risker.
Vocal samples are a major part of DEADBEAT’s sound.

“Half of them are from a cassette I found on the ground,” said Risker. “It was just this guy selling vitamins, he had some really great things he said on it, and so I just cut it up and put them in.” DEADBEAT also uses samples from Charles Joseph Smith, a Chicago classical pianist.

“Adding in some samples kind of gave us sort of an overarching theme to all the music,” said Risker. “It’s the glue of the set, really, to have those kind of spoken word samples interstitial,” said Wentz.

The band has started working on new material and plans to record more music in the upcoming month to expand their live sets. DEADBEAT can be found on Bandcamp, SoundCloud and Spotify for more recording samples. The band has a FaceBook band page and according to FaceBook, are “very responsive” to messages.