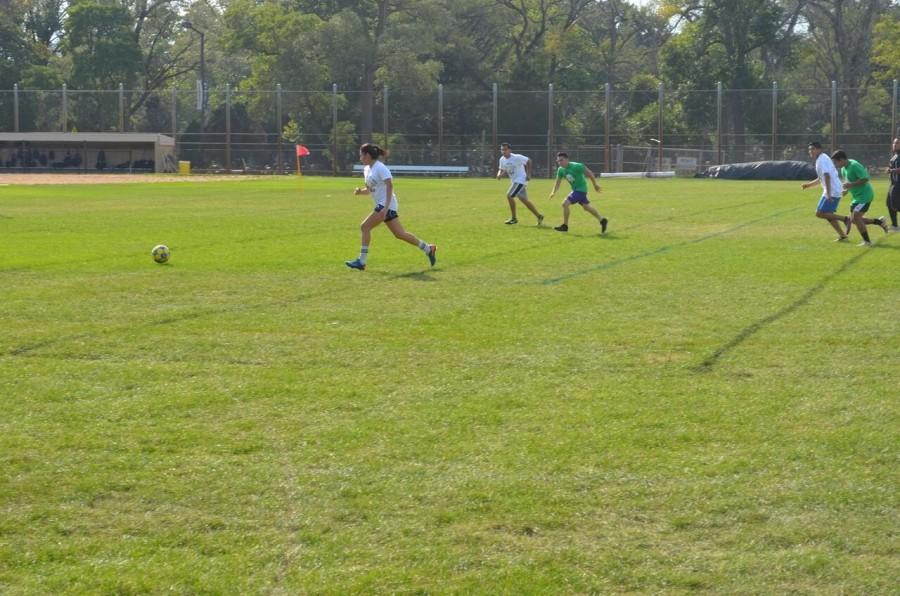 The Latino/a Resource Center kicked off Hispanic Heritage Month with a soccer tournament.

It is a one-day, point-based style tournament where teams earned three points per win and none for every loss. In the event of a tie, each team is awarded one point. There were four teams, each representing a Latino organization from NEIU; ENLACE, Proyecto Pa’lante, Latino/a Resource Center and El Centro. The four teams in the tournament played each other once. The two teams who accumulated the most points would meet each other in the final.

The White team, represented by the Latino/a Resource Center, being no strangers to the final, were looking to redeem themselves after losing in last year’s final in penalties to the Blue team, which was represented by ENLACE. The White team was the underdog, having just lost their previous game to the Green team 6-3. They came out strong in the final, putting in a dominating performance that gave them a 2-0 edge at halftime.

However, the Green team came out of the break focused and looking like the team that qualified in first place. On one occasion, participant Arnold Corzantes received the ball by the touchline at about midfield, looked up to see the keeper a bit off his line, and ripped it over the keeper and under the crossbar for a screamer of a goal. It could be argued it was the goal of the tournament, if there was such a thing.

The Green team’s hope for glory, however, was short lived. White team forward, Jazmin Perez, found the ball at her feet about 20 yards from the goal and with only one defender in front of her. She dribbled right, hesitated, and went right again, leaving her defender stumbling before slugging the ball past the keeper making it 3-2. After a few minutes of quality defending, the referees blew their whistle signaling the end of the match. The White Team – Latino/a Resource Center- were the new owners of a trophy, had bragging rights, and are now the reigning champions of La Copa Aguila Dorada.

Soccer is a part of the culture of many Hispanics. While this tournament was represented by Hispanic organizations, it is intended to commemorate Hispanic Heritage Month and to get all students involved on campus.