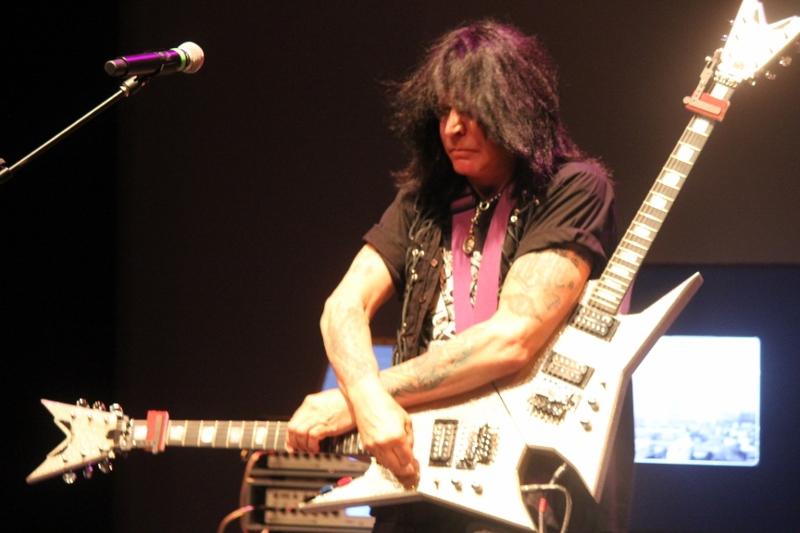 The walls of the auditorium shook as the sound of heavy guitar distortion filled the room with melodic color and sound.

Michael Angelo Batio, world-renowned inventor and guitarist, returned to the University 36 years after receiving his Bachelor of Arts degree in Music Theory. The workshop held with Batio was the first in a new program launched by the Alumni Association called NEIU Alumni: All Access — a series focused on the successful lives and inspirational work of NEIU alumni and their degrees.

“It is so great to be back here,” Batio said to the audience. “I have had a degree in music theory, I minored in composition, I took piano, and I really loved it here in Northeastern.”

Batio has played in many different locations during his career, from villages of China to the pueblos of Mexico. He says he owes his success to his dedication, to his playing and his philosophy of sticking to ideas to the end.

“There’s the old Nike commercial that said ‘Just Do It.’ It was pretty good, I like it, ‘Just Do It!’ said Batio. “Sounds good, but I’m not exactly a firm believer in just doing something.  I have a better way, here’s the Michael Angelo Batio modified version. ‘Just finish it.’”

Over the years, he also taught guitar, both in school and through video and DVD in his self-instructional works, spanning around 30 years of his career and counting.

“I also taught a very famous student named ‘Tom,’” said Batio. “I used to teach up in Highwind Park… I was at a music show in LA, and I see this guy come up to me, and he’s like ‘Thank you, Michael.’ I’m like ‘For what?’ He goes, ‘Well, you were my teacher.’ And I’m looking at him, and I know who he is. I didn’t realize ‘Tom’ at that time was Tom Morello from Rage Against the Machine.”

He added: “I like to teach, I like to help. I always wanted to help people, I wanted rock music to have the great guitar music playing in it like jazz and like great violinist and orchestral music.”

During the performance he donned his famous double guitar, performing in a unique style of accurate and erratic fretting, upside down playing, and multitask playing with tapping frets, all without a single hitch in the performance.

The audience gave a standing ovation after each song.

Many of Batio’s songs draw inspiration from heavy metal bands such as Led Zeppelin and Judas Priest, as well as from the classical music of composers such as Mozart and Paganini; the songs included many melodic and harmonic flourishes of notes leading to one another, and fluid timing in between each note.

At the end of the show, Batio met with the audience to share thoughts on the show, as well as to ask questions about his thoughts on newer music and his advice for guitar aficionados.

“Don’t reinvent the wheel. Learn what came before you,” advised Batio. “It’s easy to criticize, it’s easy to sit on a chair and say ‘It sucks.’”