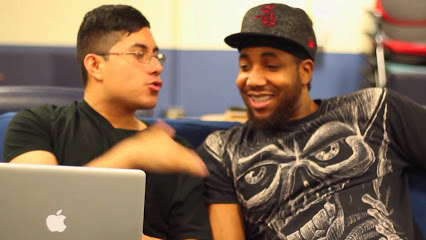 Ever want to be YouTube famous? Ever try? David Montalvo and Victor Collaso did with their original web series “Take One Pass It Back.” The series follows a diverse group of college students in this slice-of-life sitcom, just trying to survive everyday life. As the creators, writers and actor and director, respectively, Montalvo and Collaso manage to balance gritty realism with highly exaggerated characters, bringing a unique style to the beloved genre.

With the second season about to air, Montalvo sat down to discuss what viewers could expect:

INDEPENDENT  – Where did the name “Take One and Pass it Back” come from?

DM – [laughs] That’s a good question. Well, in episode two, when see the part where the professor, he grabs a bunch of papers and he hands them to the students and he says, “Take one and pass it back.” So, I made a song with that. You hear it in the trailer.

INDEPENDENT  – Does it hold any meaning to the story or is it just because you like the name?

INDEPENDENT  -How is season 2 going to be different from season 1?

DM – So, we left off, from season 1 with Yaakov, which is my character; he found a new girl, from online dating. This is our chance to meet this girl. What happened and how are my friends going to take it? Do they like her? Is she a gossiper? How is Clare (Clarybelle Navarrete) gonna react? Because we left off with realizing that she actually liked [Yaakov.] So, we don’t know.

INDEPENDENT  – A big theme is diversity and stereotypes. How did you find the balance of making these characters believable, without being offensive?

DM – [Laughs] So, one of the characters, his name is “Big Man,” (George Lanzourakis) cause he’s a big dude and all he does is eat Cheetos. So, we thought, let’s call him Big Man. And he liked it, it hooked his attention. The one that was really difficult was the character Kush (Ron Wilson). In real life he doesn’t smoke. He’s never smoked since he was in eighth grade. One time he tried, he’s like, “Never again.” And it was hard for him because he doesn’t know how to act like that. So, we had to train him to watch videos of Snoop Dog on what he does.

INDEPENDENT  – You’ve said that you came up with “TOPIB” while eating tacos at Sergio’s restaurant and said that the spiciness of the tacos gave you the idea. How so?

DM- This is interesting that brought up something from way back. Me and Victor [Collaso, co-creator] were sitting down and we were eating and something came to both of our minds, like, “we should come up with a show. This’ll be our chance.” We can talk about people that we see .

DM – Very interested. We’d done a couple of projects, Victor’s the president of the film club, I’m the vice president and we never thought we could make this come to life, because it was hard to find actors from Northeastern.

INDEPENDENT  – I loved seeing professors on the show. A lot of them said things they wouldn’t normally say in class. How hard was it to get them to do that? And will we be seeing more?

DM – With professor Jeffery Wade, he’s a Communications professor. I went to talk to him, show him the script, he read the script and he understood he’s not playing himself, he’s playing Professor Grumpis. Because he’s a grumpy person. Also, in season 2, we have more professors like Angie, [Sweigart-Gallagher, Theatre professor] Kristin Hunt, [Theatre professor.] We have a master in kung fu, also graduated from Northeastern. He helped us out in episode 6, with some choreography, so it was nice to see that we’re only using people from Northeastern.

INDEPENDENT  – The situations these characters get in are so relatable. Are any of them based on real events?

INDEPENDENT  – So, the music is really great-

INDEPENDENT  – I do love the music, I love it a lot. Was it a band that you knew who helped create the music or did you just find it?

DM – I have a friend who works at the Pedroso Center, Davor Palos, and he’s the lead singer of the band, Ode and he was very good to us, and he let us use their music for our show. This will also help him reach out his music and help us get out there. So it was more like collaboration.

INDEPENDENT  – Alright, I love Clare, but she’s the ONLY girl. I know we left off with Chelsea coming in; are we going to get more girls this season?

DM – There are more girls this season. The biggest one you’ll see is [Yaakov’s] girlfriend. I can’t spoil the name yet. You’ll see her. You’ll see more professional actors like Tyler [Miles, an NEIU theatre student.] But he’s not a girl, sorry. But we have more girls coming. Also, we have more characters that are older. My mom, my aunts, they’re in the show. Kinda to show the Latino culture, how parents behave and question when you introduce them to a girlfriend.

INDEPENDENT  – How did your mom feel about the less than savory language?

DM – (laughs) – Well, she’s the executive producer. My mom at first didn’t like the language. She’s seen all the episodes, every one. She did get upset, “Why did you have to curse? You’re a good boy?” Because my mom never hears me curse at the house. In her house you can’t, but with your friends, it’s a different story. I explained that it’s all acting. And because of her we were able to film season 2 at my house. To make it more like a sitcom. Like “The Big Bang Theory,” it takes place in the house and she was really supportive. She’d buy food for the actors.

INDEPENDENT  – As of now, a lot of the episodes have around 500 views, one at a thousand, how does that feel?

DM – It feels great. [Laughs.] When you type in “Take one, Pass it Back,” we’re number one on YouTube, plus we have over 20 countries watching our videos. The three main countries are the US, Guatemala and Mexico. That’s a blessing. It’s a big deal for us. And what’s interesting, we’re the first sitcom in Chicago on YouTube. Because usually sitcoms are found on Vimeo. Vimeo has more professional camera work, higher production, but we use YouTube, because we feel it’s easier for people to watch it.