Paper or Plastic? What about neither? 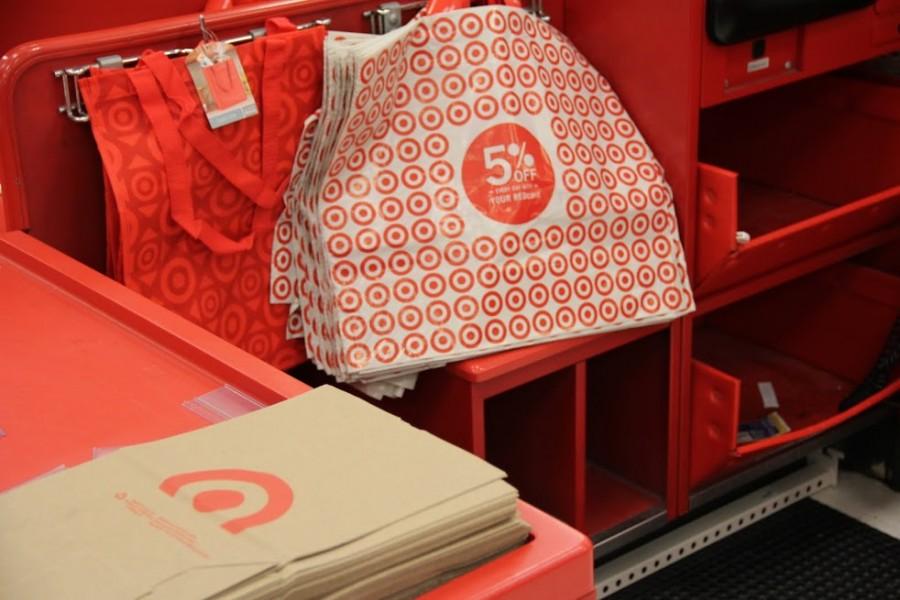 Target customers get the option of paper, plastic, or reusable bags to carry their purchases.

The realities of using plastic bags and their effect on the environment should be enough to encourage consumers to find an alternative.

According to ecowatch.com’s “22 Facts About Plastic Pollution (And 10 Things We Can Do About It),” 10 metric tons of plastic fragments (grocery bags, bottles, etc.) is carried into the Pacific Ocean each day just from the Los Angeles area alone. That same report states that a typical American wastes approximately 185 pounds of plastic each year. Those statistics and some of the others on the list gross me out and make me kind of sad. I mean, 10 metric tons of waste a day times 365 days in a year equals 3,650 metric tons of waste going into the ocean each year. That’s the equivalent of over 8 million pounds of plastic fragment waste. If there’s that much waste coming solely from the Los Angeles area, I don’t even want to imagine what the total amount of waste would be for the world.

Given these facts, it seemed only natural that I would be in enthusiastic favor of the plastic bag ban in Chicago. The ban, also known as Article XXIII in Chicago’s Municipal Code, prohibits chain stores with more than 10,000 square feet of floor space from distributing single use plastic bags to customers as of Aug. 1, 2015. A ban of plastic bags for chain stores, which include those with less than 10,000 square feet of floor space, takes effect Aug. 1, 2016. Stores that do not comply with this measure are subject to fines ranging from $300 – $500 for each day of the violation.

However, there was a clause in the code article that I didn’t understand until August 1st rolled around. During the first week of the ban, a friend of mine went to Target and came back with plastic bags. They were a different kind of plastic bag though. According to the print on them, the bags could be used up to 125 times and were made with mostly recycled products. Now there are at least three of those bags in my friend’s possession. I don’t think he’s reused them once since then and, from what I gather, he doesn’t plan to. I can’t imagine that he’s alone.

If everybody else who’s going to Target is getting these type of bags and won’t reuse them, don’t recycle them and just get more each time they shop, how does that change anything? Wal-Mart and other chain stores in the area have also opted to go with thicker plastic bags over giving customers paper bags. However, paper bags aren’t the greatest solution either as they tear easily, often don’t get reused or recycled either and the process of recycling them also has a pretty significant environmental impact. So, are we really stuck in a catch-22?

I think there may be another solution – bring your own bag. Seriously, invest in a good reusable bag. Find one at a yard sale, ask for them for your birthday or next gift-getting holiday. Spend $1 at the store and get one. Whatever you need to do – do it. Stop expecting stores to supply bags for you and think about the fact that polar bears are an endangered species. Do you really want to live in a world without polar bears? I don’t. What can we do to ensure that doesn’t happen? We can think more about climate change and what we can each do to minimize the waste that goes into the world.

Maybe the next time you’re out shopping and the clerk asks “paper or plastic,” you receive a discount just for saying,“Neither, thanks. I brought my own bags.” (Target and some other retailers give customers five cents off for every bag they bring and use for their purchase.)

If you still think the convenience of getting another paper or plastic bag, that you don’t reuse and don’t recycle, is more important than the small cost you might save at the register, I urge you to think about the polar bears – and hundreds of other species of animals impacted by climate change.