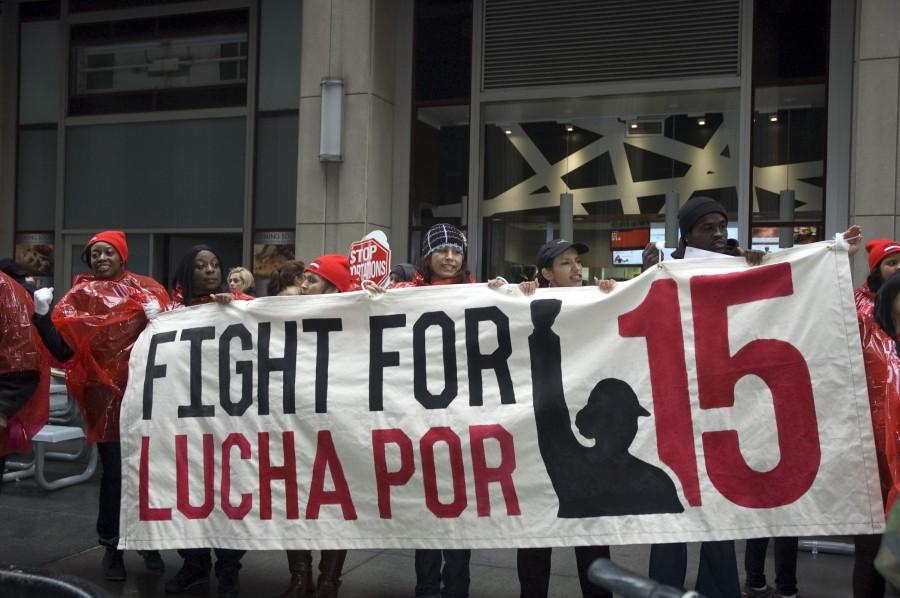 Who does raising the minimum wage actually benefit? I’m not sure.

On April 15, groups of workers around the nation walked out of fast food chains and other businesses in a protest called “Fight for 15.” This protest aimed at corporations was designed to spark a tax-day debate about the minimum wage for full-time workers in many fields. In Illinois specifically it was aimed at fast-food. In states like Alabama it was designed to draw attention to home health workers.

Raising the minimum wage brings up many questions on either side of this debate. Some of the benefits being that if workers are making more money they are able to make ends meet at home. This is called a living wage. Other benefits would be that if workers make more they can spend more and therefore contribute to our recovering economy.

Some opponents question the sustainability of simply raising the minimum wage, especially for low skilled and low-wage workers. For example, your average fast-food workers and tipped employees. Other concerns are the effect that a high minimum wage would have on small business owners. Not only for them to be able to keep their current employees but also to hire new employees.

Would having to pay their workers more cause them to have to raise prices or shut down completely?

The minimum wage is defined as the lowest wage permitted by law. This means that it is quite literally the least that an employer can legally pay a worker. A minimum wage does not indicate the worth of the work done. Should workers really be settling for minimum wage in the first place?

I wouldn’t. Neither should anyone else. Pay should reflect the work being done and not an employee’s need to pay bills or support a family. The minimum wage should not be a living wage, because no one should live on the minimum.

If an employee has been working for minimum wage without asking for, demanding or expecting a raise why do they deserve it?