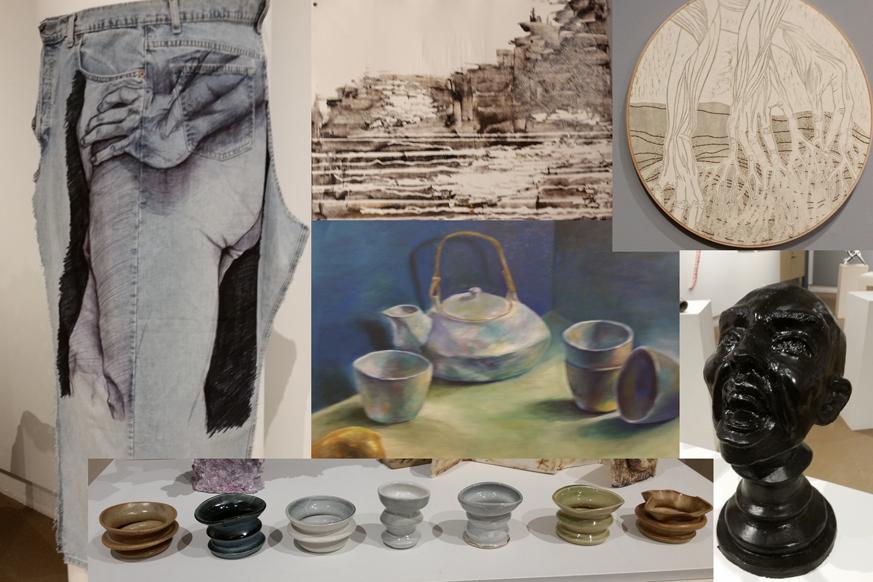 These works, and many more, will be judged as part of the juried art exhibition.

The jurors will also be hosting a reception on April 17 at the gallery from 6:00-9:00 p.m. at which time the awards will also be presented. The juror is Matt Irie, a professor of painting and drawing at McHenry College.

Mark McKernin, the art department chair, explained that though this is a very celebrated event he becomes unhappy as he nears the exhibition because he spent so much time with the students exhibiting their work. He feels, since most of them are seniors this is like their .” For most of the students, this is the first time they will exhibit their work in this particular exhibition — and for some the first time they enter their artwork in any juried exhibit.

This exhibition, according to McKernin, is a good example of a representation of all the disciplines — all types of media — of art in an exhibit. The award ranking will be a first place which will be called “best in show,” a second place, a third, and then the best 2D and best 3D work (though these last two awards have not been awarded every consecutive year).

Simply to get your art in the exhibit is an honor, according to McKernin, since the artwork all has to be pre-judged simply to allow it in the exhibit for final judging. “That’s a feat,” said McKernin. Only half of the pieces that are submitted will end up in the exhibition.

Several of the students have more than one piece in the exhibit. Peter Goldman, office administrator of the art department, said, “This is the first year we’ve had collaborations,” in which he meant that there were more than one artist working together on one piece.

“I’m comparing natural plant life to the body,” said Kennedy. As for her third piece, she said Joy Harjo, a Native American poet, provided her inspiration.

Brandon Sherrod, a senior completing a studio art major with a concentration in graphic design, said that in his photography pieces he wanted to depict the “interaction between humans,” and he also wanted to “capture something we say is intangible.”

There is even art in which the pieces are designs for packaging and books for companies. Gillberto Remigio Jr. is majoring in studio art with a concentration in graphic design and will be graduating spring of 2016. For his piece, he redesigned packaging for a less popular brand of oil filters because he thought it would need a new look. Remigio Jr. also has a few pieces that will be showcased in the show at NEIU, as will Sherrod.

There is an amalgam of various mediums used and several styles of work that create an ambiance when you walk inside the room and are bombarded with colorful pieces jumping at you with every turn. Check it out before April 30.