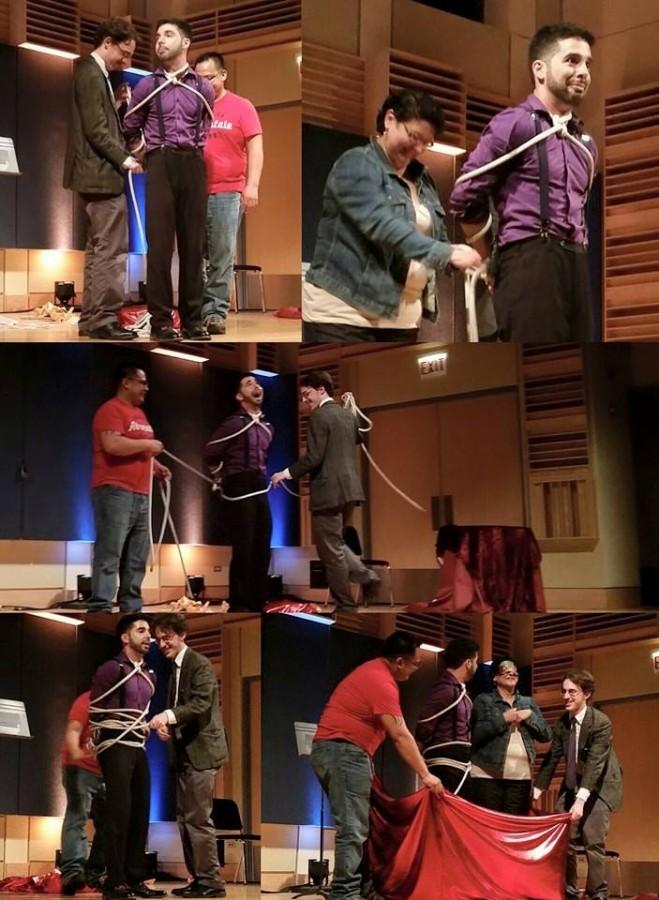 More than just a magician, Manuel Rueda infuses his shows with upbeat comedy.

You’d better get his autograph before he miraculously disappears!

Manuel Rueda, a 22-year-old magician known as Mago MOR, performed in the Recital Hall on Thursday, April 9 and enthralled the audience with his magical talents and personality. He wants to travel the world with his show “Nothing is what it seems” — and NEIU is his first step on that journey.

MOR magically appeared at NEIU in fall 2014 as an international student. He used magic to win first prize in NEIU’s Talent Show this past fall semester. That was not enough for him, so he tried his luck at an audition for “America’s Got Talent.” Again, you’d better take a picture with him – he may become famous.

As Manuel said, a good magician is nothing without an audience.

“Every single performance is unique, mostly because energy of the audience is always different,” he said. “That’s why I’m really excited about performing. I don’t know what is going to happen!”

Indeed. MOR has experienced some unpredictable situations in his career as a magician. “Once I was performing in Magic Chicago at 773 Stage. I was preparing myself in the dressing room when suddenly the door opened and an assistant told me with a panic voice: ‘You should be on the stage right now. Your music is playing and people are waiting!’” said MOR. “So I went to the stage. Like nothing happened. Everybody thought it’s the part of the performance and laughed,” he added. It turned out that the speakers in the dressing room were off, so he could not hear the announcements.

Among many magic pieces during Thursday’s show, MOR presented his “Escapology” performance, the same that led him to victory in NEIU’s Talent Show. He was coiled tightly in a 50-foot rope and covered by a curtain. He not only managed to put on a coat while being tied, but also magically escaped after a few seconds.

He repeated this show while performing on a main street in Las Vegas, but for the first time, not everything went as he planned. Muscular ex-police officers volunteered and used all their strength to tie him up. “I couldn’t even move a finger,” MOR said. “It was the first time in my six-year career I felt scared. I felt like I was in a big trouble.” He finally managed to escape using his physical strength and, of course, his magical skills.

During a 10-day trip to Las Vegas in March, MOR took a course at the Magic & Mystery School and had a chance to meet with illusionist David Copperfield, comedy magician Mac King and magical duo Penn & Teller. He discovered that he will definitely “devote life to magic and create magical moments.”

Rueda loves his job. He constantly repeats that it’s not just a hobby, but a life passion. “The thing I like the most about being a magician,” he said, “is that everything is possible. You can do whatever you want.”

Where should you find Mago MOR if you missed his show at NEIU? In a hat? Under an invisibility cloak?

“I have applied for an international artistic program in New York. I also consider going to Los Angeles and Mexico to check how my magic works there,” he said.

Next year MOR is also planning to graduate from Universidad Rey Juan Carlos in Madrid, where he studies Teaching Visual Art and Physical Theater. He will disappear soon, but you never know when he will magically appear again. So you’d better take his autograph now.