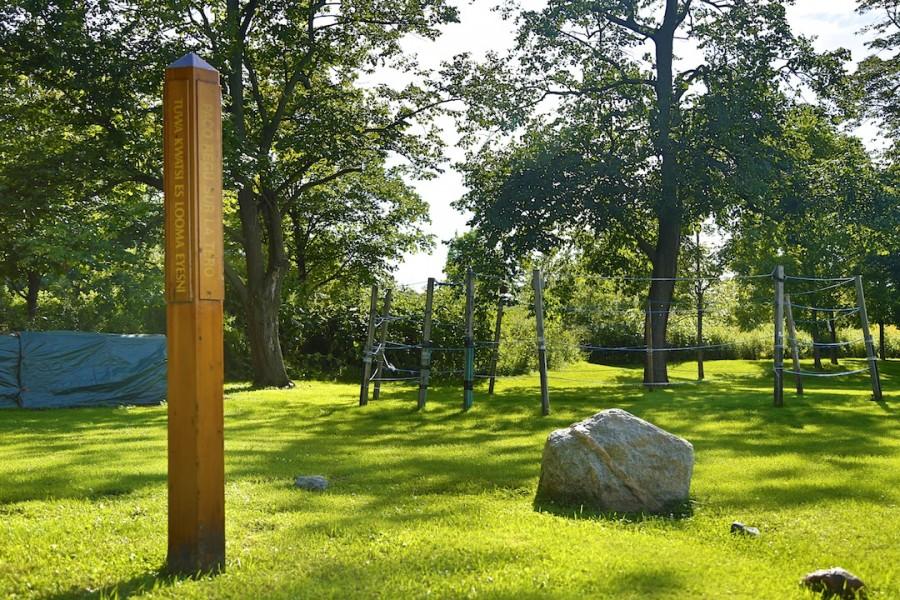 In six different languages, the peace pole reads “May peace prevail on earth.” On the right is a 1.8 billion year old crystal.

There is a little known area on campus—a small field between the P.E. complex and the WTTW building where a curious collection of artifacts and structures stand. Spiritual leaders from all over the world have traveled to Northeastern to visit this field where they take part in fire circles, walk the peace labyrinth and marvel at a 1.8 billion year old crystal.

Retired health and P.E. instructor Dan Creely can be found there, cutting the grass and tending to the land’s needs.

During one visit by some Cherokee elders, the wife of one of the elders pulled Creely aside and said to him, “I had dreams about your school … I want you to know, people are going to come here from all over the world.”

“At first I didn’t understand her,” Creely said. “But everything she said turned out to be exactly right.”

So how did a modest field become a spiritual hotbed for so many prominent people? Creely explained, “In 1988 we offered our first adventure education class and it was a combination of team building, we did meditation and we integrated Native American traditions. An outgrowth of that was T.E.A.M., which stands for Teachers of Experiential and Adventure Methodology.”

“In spring of ’94, T.E.A.M. was asked by our national organization, The Association for Experiential Education, if we would host the international conference … One of the things that came to the conference was this peace fire. I had met some native people who were fire-keepers and used their old traditions and fire circles. We asked them to bring the fire circle to our convention in Lake Geneva. What I didn’t know at the time was that this fire circle had never been shared outside the village—ever! If had known that I never would have asked. ”

The fire-keepers were Duane Kinnart and Bruce Hardwick. When asked why they agreed to do it, the Ojibway fire-keepers said, “We’d like to help that man,” referring to Creely.

Soon after the convention, a fire circle was installed at NEIU. It lies beneath the branches of a scarred tree that had been struck by lightning. Later on, when the Ojibway elders returned for a visit, they noticed another tree just a few feet away also got struck by lightning. The elder said, “I had a dream about this—double thunder. This is very special.”

Since the induction of the fire circle in ’95, new installments were made throughout the years, further sanctifying the hallowed ground. In ’96, the Hardwick and Kinnart elders returned for another ceremony, during which, they planted a cedar tree, a sacred tree of the Ojibway.

In ’99, a peace pole was installed. Encapsulated in the six-sided wooden pole are hand-written messages of peace. On each side of the pole, written in different languages is “May peace prevail on earth.”

At the 2006 graduation, the Ojibway elders, Hardwick and Kinnart received the NEIU service award.

After 35 years with Northeastern, Creely retired in 2009. During his last year, the field’s latest installment was made, a white pine tree planted in Iroquois tradition, where symbolic weapons of war were broken and buried beneath the tree, hence the term “bury the hatchet”.

“I come to this tree at the beginning of every semester,” senior Ken Smitley said. A freshman in ’09, Smitley was at the tree planting ceremony and has since attended many fire circles.

In 2006, two crystals were excavated out of the Black Hills of Dakota by NEIU students at the Crazy Horse monument site. One is 900 pounds and the other is 2,000 pounds, both estimated to be about 1.8 billion years old. The 2,000 pounder sits in front of the science building at NEIU, while the 900 pounder sits atop a small mound in the peace field, aligned with the peace pole and the peace labyrinth.

After touching the crystal, a Mayan elder said, “My eyesight was gone for a little bit. That’s how strong it was. I’ve traveled around the world. I’ve spoken at many schools. This is the first university I’ve ever experienced a true sense of spirit on its campus, and I feel connected to the land.”

Creely recalled, “The Cherokee elders came to bless the crystal. One of the elders said to me ‘This is very special. You’ve heard of people going up the mountain for enlightenment? I’ve never heard of the mountain coming to you.”

A popular feature in the piece field is the peace labyrinth, a spiral path marked by carved stones. For thousands of years, labyrinths have been used for meditation by cultures all over the world.

“I called Joe Kish who was the vice president of buildings and grounds and I said ‘Joe, do you know what a labyrinth is?’ He said ‘no.’ ‘Come on, I’ll take you to one. There’s one behind the St. Scholastica Academy in Evanston’. Joe was an army guy. Very structured. Sort of rigid … and when he came out of the labyrinth he said ‘we gotta get one of these’.

The labyrinth was designed by German “earth architect” Johannes Matthiessen. Matthiessen had been working with art students from a Waldorf school in Evanston, making the stones that would eventually laid the path.

“One week after the Labyrinth was installed, monks from the oldest monastery in India came to visit with the Cherokee elders, and they blessed this labyrinth.”