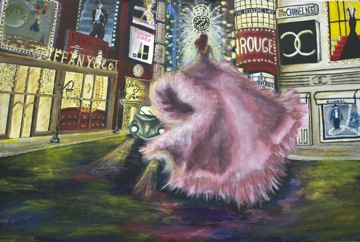 Take a break from the negative news of the world by walking through ‘Breaking Hours,’ Zeenat Ismail’s Senior Art Show. Ismail presents a narrative series of 18 breathtaking paintings designed to stimulate the viewer’s imagination.

“Daily life is too serious,” Ismail said when asked of the purpose behind ‘Breaking Hours.’ “We are bombarded by images of war, crime, feminist issues by the media. These issues are important, but people need a break from the bad news. This series is intended to bring a return to the fantasy and magic of childhood,” Ismail said.

Her influences include the rich colors and dramatic light play of the Impressionist era. Ismail also receives inspiration from films such as Pan’s Labyrinth, Disney movies, and musicals, particularly from the Golden Age of Hollywood cinema.

She described the concept of the unseen world as viscerally attractive, and likened the development of the ‘Breaking Hours’ series to search for a child’s enchanting perspective. “Creating fantasy worlds of all scales remains the primary impetus of my work,” Ismail said in her artist statement.

The paintings themselves recall dreamscapes and a return to a more elegant age. “I hope my work will broaden the viewer’s imagination,” Ismail said.

The largest painting of the series, “Unbinding Flight,” features an unearthly odalisque gliding up into the airspace of a cityscape. She wears a resplendent pink gown that unfurls its lush marabou trim toward the viewer, inviting them to step into the moment and feel the crisp night air upon their skin.

Ismail is graduating NEIU as a Studio Art Major with a music minor and plans to continue her current series and seek out gallery opportunities. “I thought about going into business, but I couldn’t see myself doing anything but creating [art],” Ismail said of her future plans.

‘Breaking Hours’ runs from Feb. 11–22 in the Fine Arts Building.