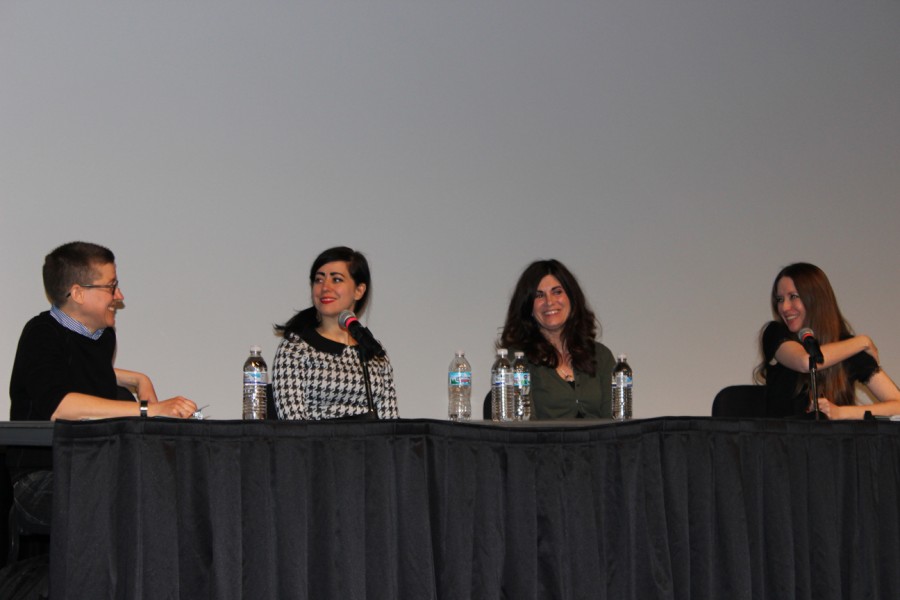 A.K. Summers, Nicole Georges, and Phoebe Gloeckner speak on their work at the Graphic Novelists Panel of the Visiting Writers Series.

The Visiting Writers Series at NEIU had the extraordinary opportunity to host an event for a group of three graphic novelists, Nicole Georges, A. K. Summers, and Phoebe Gloeckner. The three artists gave presentations on their remarkable work and were then joined onstage by Hillary Chute, a professor of English at the University of Chicago, who served as moderator for a panel discussion and Q&A.

Some of the most interesting and significant work of all three artists has been at least partly autobiographical. Georges is the author of “Calling Dr. Laura,” a heartfelt and humorous account of Georges’s call to the conservative radio talk show host Dr. Laura Schlessinger and her experiences leading up to the call, including the discovery of a family secret that altered her perception of her own identity. From the retelling of Georges’s initial visit to a psychic as a birthday present from her girlfriend to her whimsical cover drawing of herself with a chicken, Georges presented herself as charming both in her work and in person.

Summers’s graphic novel “Pregnant Butch” was her way of expressing the uniqueness of her experience as a “masculine identified person doing a feminine inspired thing.” As a butch lesbian, Summers’s pregnancy was not without its particular difficulties – as well as its tendencies to provide laughter. Summers’s novel utilized different drawing techniques to portray the subtleties of her butch identity, including a more “realistic” style incorporating more shadows, versus a more simplified “dot-eye” style.

Gloeckner may soon be most known for her “Diary of a Teenage Girl,” a warm and sincere coming of age story about a teenage girl who finds ways to express her growing sexuality. Gloeckner’s graphic novel has been made into a film starring Bel Powley, Alexander Skarsgard, and Kristen Wiig. With direction by Marielle Heller, the film premiered at the Sundance Film Festival this past January.

Gloeckner also shared extensively about a new project she has been working on, on the violence and murders of young women and girls in Juarez, Mexico. This project takes slightly a different medium than her graphic novel work; it’s constructed from photographic images of dolls she made herself. Gloeckner finds this a more humane way to grapple with and re-imagine the realities of violence, and stated that she finds it easier to “kills these dolls, then wash them off and bring them back to life the next day,” than to have to imagine the murders three-dimensionally through drawing.

The event, which took place Tuesday, March 24, was the latest installment in a wonderfully enriching series at NEIU curated by Alicia Erian of the English Department. Prof. Erian and Dr. Ryan Poll, also of the English Department, introduced all the various presenters and were responsible for the seamless organization of the event, a great addition to the continued vivacity of creative life in the NEIU community.