It’s All a Piece of Pie on Pi Day 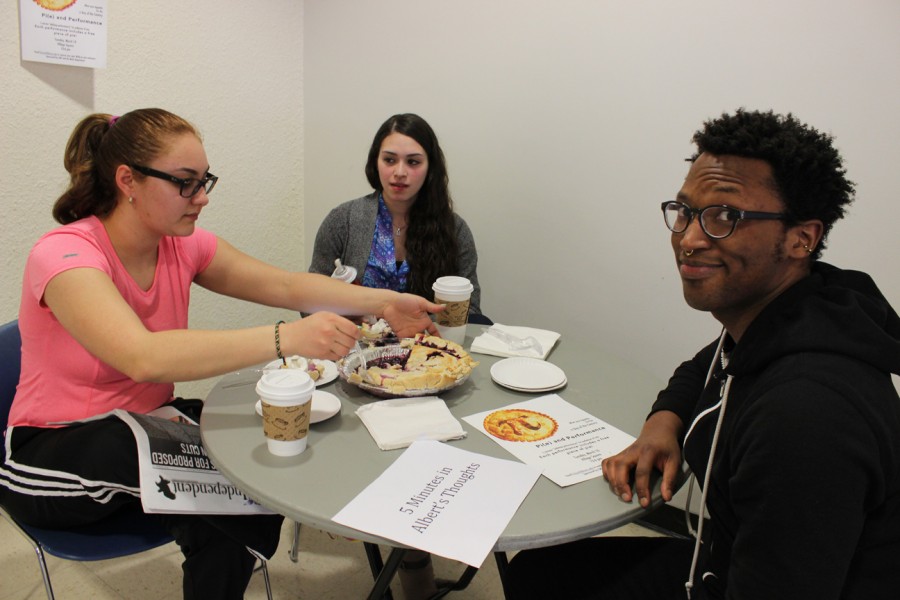 Students and teachers alike were challenged to games of wits for various pies in Village Square four days shy of the official Pi Day. For every blueberry, peach and cherry pie was a card memory game, a Rubix-Cube solving competition and a small quote battle based on the philosophy of famous mathematician Albert Einstein.

The number itself (3.141592653) inspired students to revolve their performances around games of memory and logarithms, two practical qualities in the field of mathematics. More exciting to number aficionados was the fact that this Pi Day marked a century-long occasion: the date and time matched the first ten digits of the Pi symbol: March 14, 2015, 09:26:53 a.m.

Kristen Hunt, professor of Communication, Media and theatre, organized the Pi Day festivities in collaboration with Katherine Bird, Professor of Mathematics, as part of her Experimental Theater Class. The plan, according to Hunt, was “to play on the notion of…the homophone between the number Pi and the pie you can eat.”

“We wanted to get [to] people who might not normally be excited about Pi Day,” said Hunt. “[Students] came up with ideas and shared them with their classmates and revised and studied some classic examples of performance art [performed] in a similar way.”

The phrase battle, a game conducted by NEIU Juniors Felicia Serrano and Cynthia Carrion, caught the most attention while your correspondent surveyed the event.

Serrano and Carrion gathered a collection of Albert Einstein’s most famous quotes and organized them to serve each other and inspire a rebuttal in the form of another quote, until either member concluded the battle with “That’s a very good question.”

The game was meant to inform participants on the philosophy of Einstein and to provide a piece of cherry pie for further enjoyment. One particular viewer, Dimitri Snyder, only expected free pie, but called the performance “informative” after participating.

Another prominent performance during the event involved the solution of a Rubix Cube. Heading the performance were students Fernando Gonzalez and Tony Isho, who tested the confidence and dexterity of the participants. Players were given three minutes, 14 seconds and 15 milliseconds (a nod to the number Pi) to solve a jumbled Rubix cube on the spot – the reward for success was a slice of blueberry pie.

Though the time-limit, according to players like Felipe Delagarza, was seen as unrealistic and “stressing,” Gonzalez used his solving skills to prove it achievable, as he finished the cube before the time limit, once to his record time of one minute and twenty seconds, despite claiming early on that he’s only solved it once.

Gonzalez said his Rubix Cube expertise was honed casually. He learned the ways of the cube from a friend, whom he was able to best after months of practice. Gonzalez advised that the game requires no real math and only a small amount of time–he learned how to process the game in only three days.

The trick to mastering the game, according to Gonzalez, involves memorizing the algorithms, or the “specific moves to make one after another.” Gonzalez handled the game in time for players to enjoy their slice of pie in awe of his focused twists and turns.

The performances of Gonzalez, Serrano and Carrion caught the attention of many curious members as they shared their affinity and fascination with cubes, quotes, pi and pies. Those partaking left with a full stomach, an entertained mind and above all, some food-for-thought.