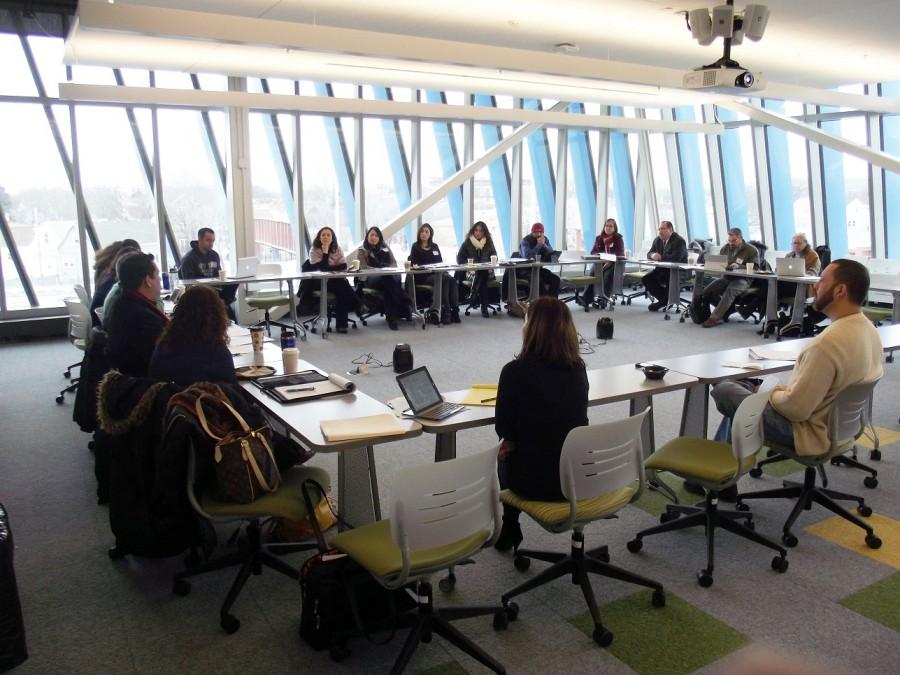 While Hispanic Serving Institutions share many common struggles, many speakers spoke about the unique experience at their university and what they have encountered.

Hispanic Serving Institutions (HSIs) are hosts to a population of students that have been historically marginalized and have suffered low socio-economic status in the United States. To ensure the success of these students, various instructors, faculty and staff from across Chicagoland came together at NEIU’s El Centro campus to discuss their unique HSI experience.

At this discussion were representatives from the University of Illinois at Chicago (UIC), Lake County College, St. Xavier University, Wabaunsee Community College, and National Council of La Raza (NCLR), along with NEIU’s own faculty.

Until last year, NEIU was the only public four year institution of higher learning designated with an HSI status, but UIC has now also been designated as an HSI through Latino/a student population exceeding 25 percent.

Though a high Latino population is not all it takes, the electronic code of Federal Regulations (Title 34, Subtitle B, Chapter VI ) states an institution must also prove at least half of their Latino population are low-income individuals, and have an “enrollment of needy students” which outlines that more than half of the student population is receiving federal aid for their education.

What began as a large group discussion detailing the different experiences each person has had at their respective HSI soon broke out into four different groups. The groups continued with a narrow focus on the topics of research, teaching, students support services and administration. These groups then later met to discuss their findings with each other.

Recalling a conversation with his friend Gabriel Cortez, assistant professor of Educational Leadership and Development at NEIU was asked if he would teach Latinos differently. He told his friend, “I’m not really insisting that, but just understanding this population. How are instructors – being culturally competent.”

Included in the group’s summary report was a step in the direction of looking into institutional incentives for students who don’t always seek the extra support that they need.

The group’s findings being announced from Isaura Pulido, presidential fellow at NEIU, talked about the need to do qualitative research. “One of the things we’re seeing are approaches that are very reductive,” said Pulido.

“We want to look at college grads, who beat the odds per say, because that reductive research would not include them.”

Some of the factors that would include would be looking at a student’s determination, climate and classroom pedagogy.

From UIC LARES program, Hugo Teruel spoke on the importance of bringing this type of inter-institutional research into practice because often anecdotal evidence is scarce and insufficient in proving what Latino support programs are effective in at institutions.

The group of student services spoke about how sometimes there is mobility and lack of mobility because of the language inside of grants which can designate where in the institution the grant money is being used. Specifically, title V grants which schools submit to the federal government when seeking funds for HSI designation.

On speaking on some of the underrepresented groups that are seldom reflected in a school’s faculty and staff, John DeConstanza from Dominican University spoke of a toolkit used by his university that trains search committee on implicit bias with structures outlined by each respective department of the school that helps avoid the lack of employees of underrepresented groups.

“How do we increase representation in administrative roles?” was the question posed by the group discussing administration in HSIs.

They stressed that administrators and representatives must have a stronger connection with Latino faculty and staff.

Improving communication is only part of it, however, to truly give Latinos a voice at HSI’s, the group also noted that schools must develop HSI committee that decide how title V aid is used.

Most importantly, they stated, was that students needed to use their voice and make their needs known.

This event was the first step into what hopes to be an ongoing project into identifying the best practices within HSIs across the state.