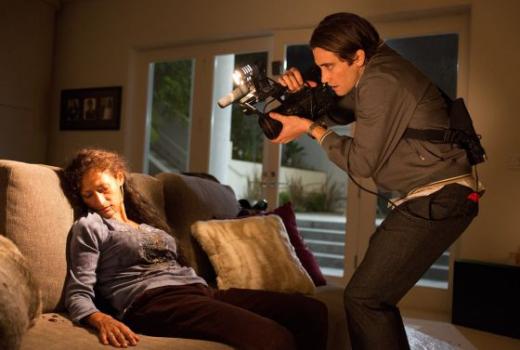 Dan Gilroy’s film, “Nightcrawler,” expands on this meaning in such a dark and exciting way that as a viewer, you don’t know whether you’re in the right or wrong. Louis Bloom, played by Jake Gyllenhaal, is an idealistic yet cruel individual who said the quote below – and wholly believes in the message behind it.

“Last year, I took an online business course, for example, and I learned that you have to have a business plan before starting a business — and why you pursue something is equally as important as what you pursue.”

Bloom wants to be the best freelance film-man and is willing to do what is necessary to make it to the top. Gilroy’s interpretation of moving up in the world involves doing questionable things, risking the lives of others and saying one thing, but then doing something else.

When I see Gyllenhaal’s performance as Louis Bloom, I see a dark personification of the American Dream. He does such a good job displaying this childlike innocence, when being confronted to new ideas and worlds, but is able to transition easily into a cruel and determined perfectionist when aiming for his best. Louis Bloom isn’t a character that’s easy to identify with. I would understand if the audience finds his character repulsive and yet interesting at the same time. In one minute, one can be captivated by his willingness to go far ahead in his field, and in the next, one finds him a monster for the way he treats the people around him.

Not only does Gilroy display to the audience characters with moral ambiguity like Nina Romina (Rene Russo), who is willing to do anything to get more viewers, but he also displays the dark side of the city of Los Angeles. Throughout the course of the film, I felt that there were two sides of this city: the city during the day and the city during the night.

I know it’s obvious that many major cities have this characteristic of duality, but what makes this so interesting is that while many people would shy away from the dark parts of any city, characters like Bloom and others like him are actually attracted this underground world of crime and horrific accidents because they view it as a way to move up in the world.

What this film does is show is that while these characters make horrible choices in relation to how they manipulate the media, it is the viewers that allow this behavior to persist. As I was watching this film, I came to the realization that the motivations behind their choices stem from what the audience wants and what they are attracted to. This is interesting because it gave me the feeling that we, as an audience, were responsible for the actions that happen, not only in the film, but also in the real world.

Overall, I highly suggest that people see this film, not only because of the characters, the writing, cinematography or direction, but also because it gives us a good look at why our media runs in this particular way.