The Second City Comes to NEIU 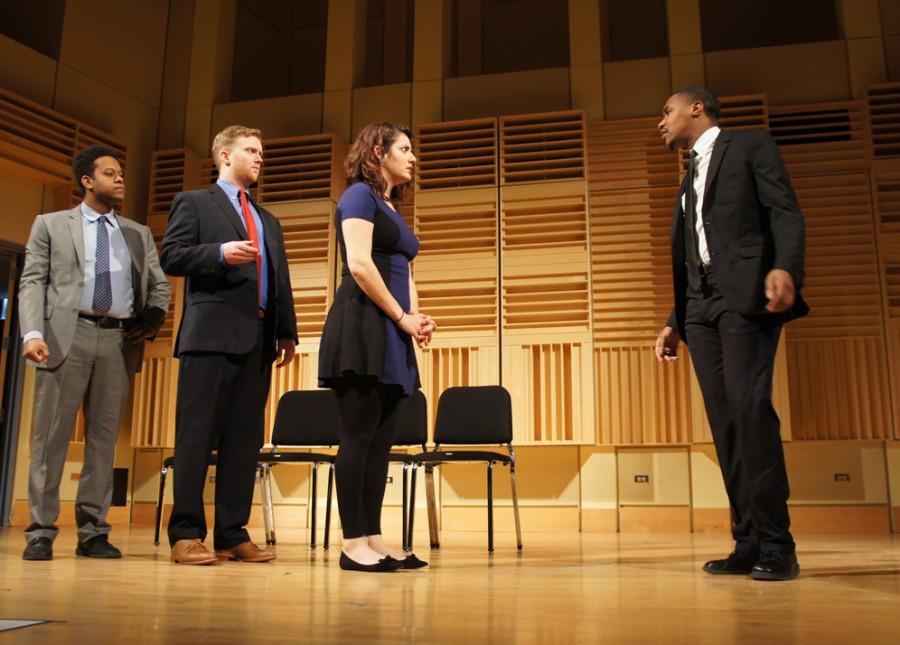 A western style opera about a love triangle with Kim Kardashian and Kanye West was just one of the outrageous scenes that NEIU students helped create when The Second City performed last Tuesday.

The show was a part of the new Diversity Week initiative that Student Leadership and Development (SLD) coordinator Elvis Guzman spearheaded.

“I had this idea back in December where I wanted to recognize the diversity of NEIU students, so I decided to do this Diversity Week event where every day of the week I would have programs that would not only capture the interest of students and create awareness, but to really just showcase…the diversity of Northeastern.”

A colleague told Guzman about The Second City’s Outreach and Diversity program since Guzman was looking for a “fun” component for Diversity Week.

“I did some research, and the outreach and diversity from The Second City recognizes that the field is predominately white men, and so they created this program where they started taking more diverse comedians and more diverse performers to do their [sketches] and when I saw that I thought, ‘That’s amazing.’”

Guzman coordinated the event with The Second City’s Director of Outreach and Diversity, Dionna Griffin-Irons.

The format of the show was a mixture of previously written sketches and live improv using audience suggestions to create comedic scenes.

“We hope that people take away that improv is definitely a tool, an art form, that should be experienced and shared by all,” said Griffin-Irons.

One of the highlights of the night included a sketch about an energy supplement. The crowd erupted in laughter as the actors explained their various reasons for needing extra energy, which ranged from “my roommate stole my Adderall” to “I work all the time.”

The true test of The Second City’s talent came when the cast had to work with random audience suggestions of “dating,” “graduation” and “pancakes.” From those three words, the actors generated hilarious scenes that included a valedictorian with an ego, Bill Gates’s wife and a gay couple on their first date.

The show ended with a Q&A where the audience asked the performers different questions. A particularly revealing moment occurred when one of the actors, John Thibodeaux, revealed that he used to be an engineer in Silicon Valley. Thibodeaux changed careers because he did not love what he was doing with his life, and this was spun into a teaching moment for the audience.

Sarah Peace, a junior music education major, was inspired by Thibodeaux’s admission. Peace took away from the show “that you can pursue great, funny things.” Peace also said that she was possibly interested in exploring opportunities in improv after watching The Second City.

“Improv is a life skill that many people can use,” Griffin-Irons said. She continued, “Improv is a great art form to find your voice, to learn about trusting your instincts, to build interpersonal skills, to be an effective team member and most important, one of my mantras is to give yourself permission to play and to stay out of your head and be in the moment.”

Griffin-Irons wants people to know the value of improv. “It’s a great way to tell stories, it’s a great way for people to laugh at a little bit of everything that’s going on, whether it’s personal — or at things in the world — but just to have a good time and understand that everybody has a story and everybody has a perspective and we can always use that in humor as part of this art form, and that’s something that everyone should be exposed to.”