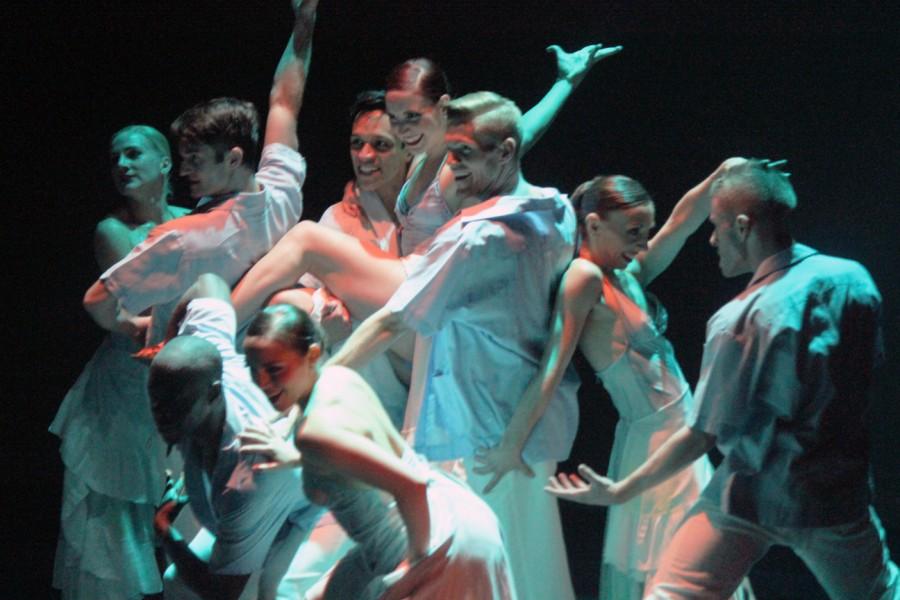 Performers from Giordano Dance Chicago take the stage in the auditorium.

For all of you who claim you “can’t dance,” I challenge you to do it anyway.

This year’s annual Ruth Page Dance Series presented longtime friends of NEIU, the Giordano Dance Chicago Company (GDC), to the stage of our auditorium on Feb. 17.

This was the first time I had been in the auditorium since I was a freshman in my Spanish dance class. I was right in the middle of the nearly full upper row of seats. Coincidentally, I ended up sitting directly behind the Artistic Director Nan Giordano, her assistant and the executive director Michael McStraw who were all very charming, as well as passionate about their work. In the audience were many dance students of NEIU, and to my left, a young man who I watched perform with his dance club the day before during International Day. Before the show began, Giordano was ready with a pen and paper in hand to take notes on the show.

As Artistic Director of this dance company, one of Giordano’s jobs is programming. She selects choreographers to create pieces (their dances), and provides concepts and structures to their collaborative final products into a journey for the audience.

“We always want people to leave wanting more, being energized with what we do,” McStraw said about the company’s objective. The programs are strategically created to take the audience through a roller coaster of emotions, and I feel that was done extremely well during this show.

For over fifty years, Giordano Dance Chicago has received rank and praise for their new ways of incorporating different styles into their jazz dance.

The company originated in Evanston when Giordano’s father Gus Giordano and his wife opened up their first dance studio. As of today, they are officially dancing in downtown Chicago in their Michigan Avenue studio location. After so many years of touring and performing all over the world, GDC has kept jazz dance very much alive. To Giordano, jazz is special because it has “energy, passion, power and soul,” and its purpose is to make people feel good energy and display beauty and emotions with different [dance] styles.

GDC is more than just dance. It is visual art.

Everything from the costumes, the interesting sounds and music and the use of colors in the lighting and shadows all contributed to each piece with great impact. My favorite dance of the night was called ‘the only way around is through’ (choreographed by Joshua Blake Carter with concept and structure by Giordano) which was a very touching piece about a victim of some sort. The dancer who played this victim was constantly tumbling to the ground, over and over again until the end when she finally rose and exposed her ripped costume. Giordano described this piece to be one of the few that actually had a theme, which was about “people living with the HCV (Hepatitis C Virus) and the journey they go through the struggle, the stigma, the burden and then the hope.”

Alongside with creating hope in their performances on stage, GDC has a program called “Jazz Dance Science and Health” which holds over 300 classes each year teaching 4th, 5th and 7th grade students in the Edgewater, Logan Square and Englewood communities in Chicago. The program teaches about bones, muscles and proper nutrition with dancer reinforcement. What kinds of reinforcement, you may be asking yourself? According to Michael McStraw, “If your teacher is telling you about the major muscle groups and you’re doing a grand plié, feeling your quadriceps and your glutes,” you’re putting your mind and body to work.

A special message from Giordano and McStraw to the rhythmically challenged: “You’re probably not going to be a professional, but anybody can dance!” said Giordano.

Do it in private, do it when you’re alone, do it around and with your loved ones. The point is, if it makes you happy, be like Nike and “just do it.”