Minority Representation in Fashion Improving, but at a Snail’s Pace 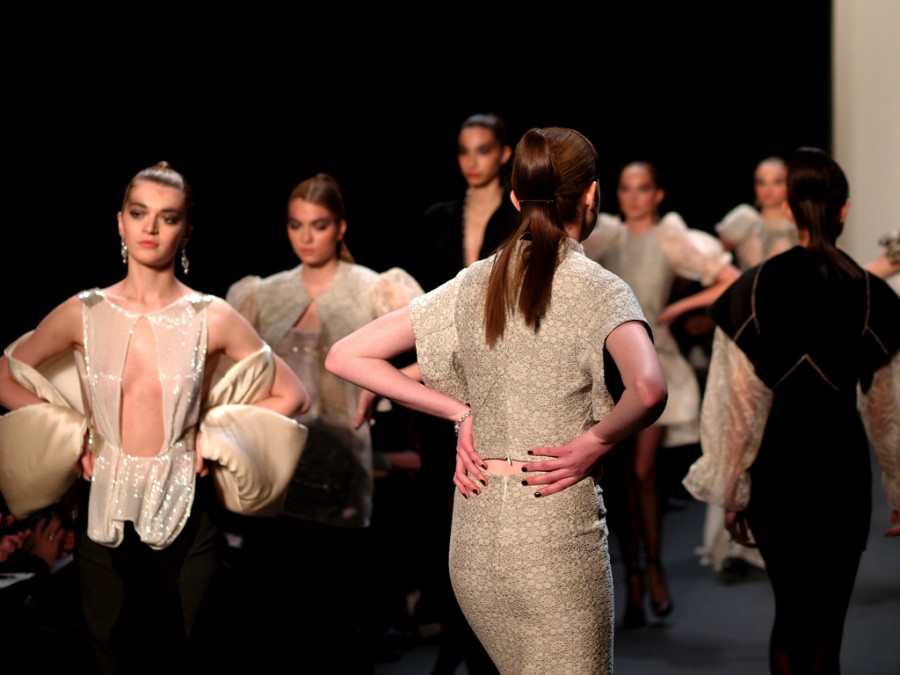 Catwalks in major global fashion cities have been criticized for appearing as lily-white as 2015’s slate of Oscar nominees.

With Fashion Week shortly around the corner (or perhaps Fashion “Month” – top international designers showcase their collections in New York, London, Milan and Paris from Feb.12 – March 11) it seems like an opportune time to comment upon a touchy subject in the trade – minority representation in high fashion, editorials and the fashion and beauty industries in general.

Beauty: it’s a subject that every person, man or woman, loves to hate and hates to love to talk about, and a subject that in this piece, I hope to tread lightly around, avoiding the soft crackling sounds of any too-sensitive eggshells breaking.

In a speech at an ESSENCE Magazine event honoring black women in Hollywood, Miss “It”-girl of 2014, actress Lupita Nyong’o famously stated that Sudanese-born model Alek Wek “saved” her by showing her a version of herself, “dark as night,” “in all the runways, and in every magazine, and everyone was talking about how beautiful she was.”

Hence, my own amazement when I discovered Chinese supermodel Liu Wen. “You are a supermodel and you look like me!” I thought. Your beauty is celebrated; your image is on clothing campaign print ads, TV cosmetic commercials; your well-heeled feet strut the runways of the most glamorous cities in the world.

Maybe for the first time, I found myself personally identifying with a supermodel; usually, I find myself hesitant to impose Western ideals of beauty upon myself, yet fail also to identify the aesthetic of contemporary Chinese beauty of my immigrant parents’ home country.

But in contemporary times, in the fashion industry, something inestimably crucial, at the mercy of the capitalist market, is at stake – the very fundamental esteem for the beauty of a human being.

Liu was in a painstakingly politically correct, highly applaudable advertisement on TV as the first Asian face of Estée Lauder in 2011. The three shining faces of French model Constance Jablonski, Puerto Rican Joan Smalls, and Liu all stared beamingly at once into the camera as a voice-over blared the benefits of the skincare products of Estée Lauder, showing off the models’ very well-brushed, luminous skin. “A make-up product for everyone!” Token representation? How about, eons away from no representation?

It cannot be understated how important this ad was.

We are not discussing topics vital to Western democracy, such as the equal access to economic opportunities for the American (or other national) middle class, but perhaps what we are discussing has greater influence on the collective cultural consciousness.

Sure cosmetics campaigns as objects of social influence have the regrettable sheen of commercialism. Yet certainly, we cannot underestimate the images and audio that are projected into millions of American homes (or onto personal computer screens).

When individuals see reflections of themselves lauded by culture or society, they cannot help but begin to love those images in themselves, as we love what we find similarities to in ourselves. And so, I thank you, Liu Wen. Thank you for your courage in displaying your image in a high-profile, very vulnerable career, so that I can find someone in the public eye who is relatable.

There’s still a long ways to go when it comes to representation. British clothing company Burberry, for example, seems to be taking strides in featuring black supermodels and British fashion icons Naomi Campbell and Jourdan Dunn in a Spring/Summer 2015 ad.

But commercial editorials such as (the despicable) Sports Illustrated Swimsuit Edition (because oh, come on – it’s such illustrative journalism on the accomplishments of sportsmen – but that’s another topic entirely), are just now for the first time placing “plus-size” models such as Robyn Lawley on its cover.

By the way, can we please call out the industry on the term “plus-size?” Why are women of different body types categorized as a different stock of human being altogether? It is a consumer label, a marketing category that can be devastating to one’s self-awareness. Seriously, can anyone think of a more disappointing, more terrible idea? Who on earth came up with this?

While fashion and beauty companies have improved at ethnic minority representation, their ad campaigns are still criticized for lack of color (and of course lack of diversity of body type). (Some have found up to 86 percent of 2014 ad campaigns feature white models, which is disproportional when compared to the 2012 US Census of 72 percent white out of total population).

But for many women, such as myself, or the inimitable Lupita, it’s not us who need affirmation for who we are or what we look like.

It’s you – the American public, Western society, the global market and creative professionals in fashion and other industries – who may be failing to recognize what is already essential and present in each and every single human being.